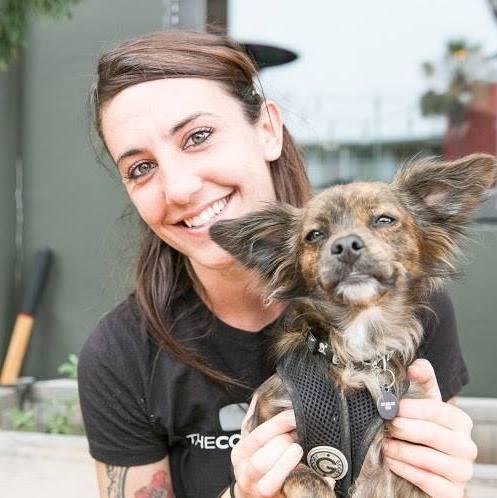 Bees are quite possibly one of the most underappreciated species on the planet. When you think of bees, the first thoughts that come to mind are probably "ouch" and "run away." As a kid who got stung by bees on a regular basis, I had the same negative associations with bees.

But here's the thing: this little, flying insect that most people freak out, run away from, and remove from their backyards, is keeping us alive. That's right. We need bees to survive. The Center for Global Research says,

"Perhaps the biggest foreboding danger of all facing humans is the loss of the global honeybee population. The consequence of a dying bee population impacts man at the highest levels on our food chain, posing an enormously grave threat to human survival. Since no other single animal species plays a more significant role in producing the fruits and vegetables that we humans commonly take for granted yet require near daily to stay alive."

Turns out we need bees to grow most of the food we eat, so they're pretty important. But there's one little problem — the bees are dying. Climate change has impacted global temperatures. With hotter summers and colder winters, many animal and insect populations are struggling to adapt, and many are dying off at an alarming rate. More than three-quarters of the world's food crops and 90% of all wild, flowering plants rely at least in part on pollination by insects and other animals.

Why Are All The Bees Dying?

This is a strange phenomenon that began wiping out bee colonies at an alarming rate in the early 2000s. CCD occurs when the majority of a colony's worker bees suddenly abandon the hive, leaving behind their queen, her eggs, a few nurse bees that tend to the queen, and all their food. The most disturbing thing about CCD? Nobody knows why it happens. No scientific cause for the mystery phenomenon has ever been proven. It's also a very recent occurrence. CCD has only been happening for the past decade. It's especailly odd because it goes against every aspect of how honeybees are programmed to function. Worker bees are supposed to have undying loyalty to their queen, and serve her their entire lives. Their whole existenece centers around protecting the queen and her eggs, and their food source—honey. The fact that these worker bees suddenly decide to abandon everything they're designed to protect and serve for no apparent reason is a bit eery. . .

One reason for the declining bee population is that harsher winter seasons are creating longer frost periods which last well into the spring. Some of the reasons bees die in cold weather include: dramatic temperature fluctuations, excess moisture, smaller crops, rodents, and beekeeper failure to check their bees in the winter. If you own bees, make sure to lift the lid of their hive and check them every few weeks to make sure they aren't freezing to death.

In California, one of the major reasons for the decline in bee population is drought. The amount of nectar a plant produces each year is directly proportional to rainfall. Severe drought in states like California has created a spike in the number of wildfires during the dry season which wipes out bee habitats. The lack of water is also killing the native plants that usually feed the bees. California used to be one of the top honey producing states in the U.S., but after more than four straight years of drought, the sunshine state's bee population is dwindling, and some beekeepers have even been forced to move their colonies out to the mid-west.

While the pesticide industry denies that there is a connection between pesticide use and bee decline, an 11-year study on oilseed rape in England and Wales found that there was a positive correlation between increased pesticide use and higher bee mortality. Herbicides used on crops eliminate weeds, which is a food supply for pollinators like bees. So crops that have been heavily sprayed with chemicals designed to eliminate pests and weeds also contribute to the decline of the bee population.

Modern agriculture is driven by volume, so we have these huge fields of monocrops. This is when there is a single crop planted over a huge stretch of land like corn, wheat, or soy. This creates a dramatically different landscape than the way these plants would grow in the wild. A natural landscape has hundreds of different plants, animals, and insects that create an interconnected habitat where each living organism needs each other to survive. By stripping that diversity away down to a single plant, pollinator insects don't have the resources they need to survive.

Problems With The Queen

Every healthy, productive hive has a queen bee that it serves. In the past, a queen would rule her hive for a few years. Now, queens are dying off at a much faster rate, leaving the colony scrambling to take care of her eggs and find a replacement for her. If a new queen isn't crowned right away, the worker bees will lay unfertilized eggs, which can only develop into males. Once the all-male colony dies out, the hive is abandoned.

How Will We Save The Bees?

Clearly we need to take immediate action to save our dying bee population. Fortunately, a unique combination of government intervention and grassroots beekeeping efforts could help restore these little lifesavers, and keep the human race around for a little bit longer.

In 2014, President Obama established the Pollinator Health Task Force to monitor and protect the health of pollinating species like bees, butterflies, birds, and bats that are vital to our food production. The group is co-chaired by the USDA and EPA, and it has three primary goals:

1) Get bee colonies healthy, stable, and back to a sustainable level by 2025.

3) Restore or improve upon seven million acres of land for pollinator species over the next five years.

As part of the initiative, the EPA is also focused on protecting pollinator species from pesticides. This includes adding new restrictions on all highly toxic pesticides, and carefully monitoring how pesticides might be harming these populations.

A New Breed Of Beekeepers Emerges

Lack of naturally available food and water for the bees has made commercial bee farms far less profitable. Beekeepers must provide food in the form of pollen cakes and set up a water source so their bees don't starve to death. Since large-scale commercial honey operations usually have hundreds, or even thousands of hives going at the same time, providing food and water to all those bees can get expensive for commercial bee farmers — especially when so many of their colonies are dying off.

As part of a larger trend of consumers becoming more involved with and informed about their food supply, urban homesteading has begun to take off throughout American cities. More and more people are growing their own food, keeping chickens in their backyard, and fortunately for the human race, some have even started backyard beekeeping. Unlike chickens, a bee colony is completely self-managed, so keeping an active, productive hive in your backyard requires very little time and maintenance. In order to thrive, a bee colony just needs access to flowering plants and a water source.

Urban beekeeping has a number of benefits for you, the bees, and even the broader community.

1) You get a free, never-ending supply of honey. Many beekeepers end up with more honey than they can eat and can sell the excess honey locally. Since honey is one of the only foods that never expires, you can build as big of a stockpile as you like.

2) Wild bee colonies that swarm in crowded, urban areas are often viewed as a public safety risk and destroyed, which is bad because we desperately need more bees.

3) Since bees play a huge role in food production, local communities get to enjoy a larger harvest of fruits and veggies.

The decision to start a beehive in your backyard should not be made impulsively. If you have absolutely no experience with bees, spend some time around someone else's backyard hive, and be sure to get some real world, hands on experience before committing to your own colony.

If you don't already know fellow beekeepers in your city, don't worry! The urban beekeeping community is very active, so you should be able to find a website, Facebook page, Meetup group, or simply google backyard beekeepers + name of your town. Getting that hands on experience is so critical. When you're working with bees (or any animal for that matter) it doesn't matter how many articles you've read, forums you've chatted in, or "how to" YouTube videos you've watched. The only way to truly master interacting with another species is practice. The more time you spend with them, the more comfortable and competent you'll become at working with them.

Before You Get Bees

1) Talk to your neighbors, make sure that nobody in your immediate area has a severe allergy to bee stings. The last thing you want is to send your neighbor's kid into anaphylactic shock because he got stung by one of your bees. Yikes.

2) If you have pets or small children, make sure they can't gain access to the area surrounding the beehive. Dogs and cats will be especially curious about their new backyard friends, but if the hive feels threatened, they can swarm, which could have deadly consequences for a pet or small child.

3) Research the prevalence of Africanized bees in your area. This is probably one of the biggest concerns for backyard beekeeping. Feral, Africanized bees can easily breed with your European honeybees, which will make your bees aggressive, territorial, and highly dangerous. Once a hive has been Africanized, you'll need to have it professionally removed.

Our Planet Is Experiencing Mass Extinction

Bees aren't the only important pollinator species in jeopardy. Other species which play an important role in our food supply are also at risk. A recent report, Thematic Assessment of Pollinators, Pollination and Food Production was a two-year study conducted and released by the Intergovernmental Science-Policy Platform on Biodiversity and Ecosystem Services (IPBES). It found that a staggering 16% of all vertebrate pollinators on the planet are threatened with global extinction. Bees and butterflies have been hit particularly hard. Can you even imagine living in a world with no food or butterflies?

Because of climate change we now have more wildfires than ever before, harsher, longer winter seasons, record-breaking summer heat, rising sea levels, and now the human race faces mass extinction because—despite what some of us would like to believe—we actually need other spiecies to survive on this planet. We can't do it alone, no matter how many iPhones we have, or how fast the Internet is. So if you like eating, breathing, and drinking clean water, I think it's time to start getting serious about climate change. I'd like to be around on this planet a little longer. Wouldn't you?

While wind energy has a ton of potential, it also has a few practical kinks that guarantee that it will play second fiddle to solar as the most promising green energy source for a while.

How Can I Reduce My Carbon Footprint? Gauge Your Vehicle's Emissions With MIT's Carbon Counter App October 5th, 2016

In 2014, transportation accounted for 26 percent of the greenhouse gas emissions in the United States’ economic sector.