The next big thing on college campuses could be organic farming.

A one-acre plot of land in a remote corner of Penn State’s 5,000-acre flagship campus has been the catalyst for change across the university.

A decade in the making, the Student Farm at Penn State is one example of how a generation of college students raised on Hot Pockets and Easy Mac are learning about what goes into growing food — and the consequences of wasting it. Organizers hope the knowledge gleaned from the farm will stick with students long after they leave campus.

Penn State University started as the Farmer’s High School of Pennsylvania in 1855, and agriculture has been a key part of the school’s mission ever since.

Discussions about a student farm had gone on for years at University Park, a campus of 45,000 students located in the middle of Pennsylvania — a part of the state so rural, it’s sometimes called Pennsyltucky. However, sustainable farming didn’t really take off until 2014, when the farm received support from the school’s Sustainability Institute.

After a year and a half of planning and development, the Student Farm acquired land in January 2016 and had its first growing season last summer. The farm supplies vegetables to campus dining halls and restaurants, a university-owned retirement community, and a small Community-Supported Agriculture (CSA) operation.

Adviser Leslie Pillen, who oversees the farm’s day-to-day operations, helped the student workers develop a long-term vision and get the project off the ground. In an age of instant gratification, the farm represented a major shift in thinking for the students.

“As undergrads, they have a limited life here, but they have a commitment to the vision,” Pillen said. “They know they won’t even be here by the time the full vision is realized, but yet they’re so committed to seeing it happen for future generations.”

Hayly Hoch and Nick Michalisin, the Student Farm Club's current Co-Directors, were part of the initial group of students who worked with Pillen to hold focus groups and conduct research into what was needed to run a successful campus farm. Hoch spent a summer volunteering on the farm at Dickinson College in Carlisle, Pennsylvania and visited farms at the University of California, Santa Cruz and the University of California, Davis.

The UC Davis farm has been around for more than 40 years and serves as a live classroom to teach students how to grow food and develop good long-term habits.

“A lot of what they want to learn about is how to create a better food system. Our job is to create the physical and social space where students can do that,” longtime Farm Director Mark Van Horn told UC Food Observer.

Dickinson’s Campus Farm sits on 50 acres and includes next-level features like yurts and livestock. It has six full-time paid student employees each semester and about 150 members in its CSA. More than 40 classes and workshops are held on the farm each year, according to its website.

Hoch hopes Penn State’s farm will one day reach that status, but already knows the road to get there won’t be easy. Their initial proposal was met with resistance from administrators, who were looking to see more student support for the farm. To do that, Hoch started a club on campus that now has about 40 active members.

“We made a proposal and handed it over to administrators asking them to give us land, but found it doesn’t work like that,” Hoch said. “We learned a lot from failures we had that year and started a club to fuel student energy around the idea.”

Although Penn State’s farm has only been around for a year, Pillen said she’s already seeing light bulb moments about consumption as it relates to food production. Most of the students working on the farm do not have a background in agriculture and only know produce that shows up in grocery stores cleaned and ready to go in seemingly endless supply.

“The farm is helping people understand what comes into play when you cook too much or don’t eat leftovers and end up wasting food,” Pillen said. “You realize how much work it is and how physically demanding it can be.” 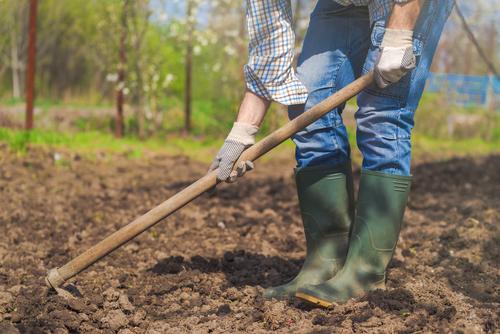 The farm took off quickly at Penn State, and Pillen said demand by groups on campus that want to help surpasses the amount work to be done on one acre. In addition, tour groups sometimes show up expecting a larger facility and are surprised when they can see the entire farm in one look around after stepping off the bus.

One of the challenges the group faces is how to ensure that everyone who wants to contribute to the farm has a meaningful outlet to do so.

“We try to make it work as best we can, but sometimes we have people picking rocks,” Pillen said. “We need to explain to them why what they are doing is important.”

The farm’s main goal is to acquire permanent space and more of it. Their current site is on loan for a three-year pilot program that they hope will pave the way for a larger space where the farm can put down roots — physically and metaphorically.

“We are the starting conversation all over again with what does the permanent site look like,” Hoch said. “It’s about more than just farming for us. We want to be part of a sustainable food systems program and are looking at how we can do that.”

Pillen also looks to Dickinson College as a model for what Penn State’s farm could become in terms of academics.

“Our overall vision for the program is to provide the resources and networks for students to essentially take ownership of their own education,” Pillen said. “Individual projects may come and go, but the base infrastructure and resources will be in place to facilitate creativity and innovation.”

"The farm supplies vegetables to campus dining halls and restaurants, a university-owned retirement community, and a small CSA operation."

Workers drained more than 5 million cubic meters (over 1.3 billion gallons) of water from the lake, which was nearly 500 feet deep.