How To Make A Paper Mache Volcano Explode

Teach your children about nature with this fun and easy science experiment.

Teaching your kids about nature and science can be a fun experience for the whole family! Learn how to make a volcano erupt with this easy guide on how to make a paper mache volcano.

How To Make A Paper Mache Volcano

Making a paper mache volcano is simple! Best of all, you probably have everything you need in your home. Here are the supplies you’ll need to build your volcano:

How To Build A Volcano

The following step-by-step guide lays out how to build a volcano for kids. You can also refer to the infographic at the end of this article for a fun visual guide! 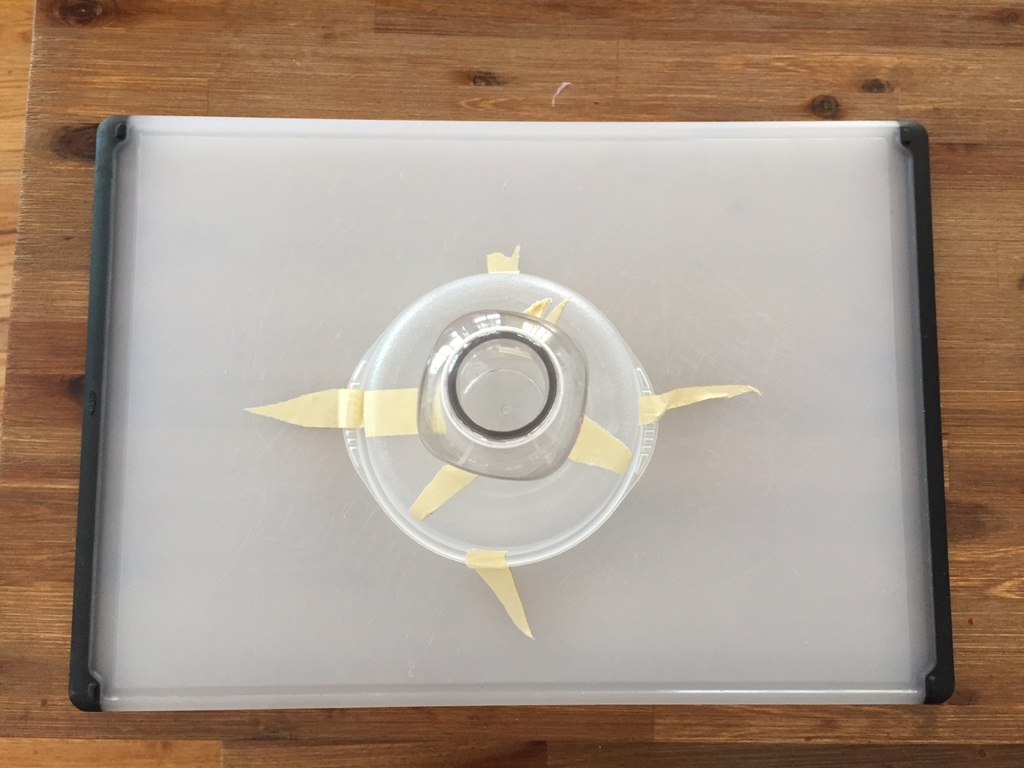 1. Cut the cardboard into a square that measures as large as you want your volcano to be. This will be the base of your paper mache volcano! 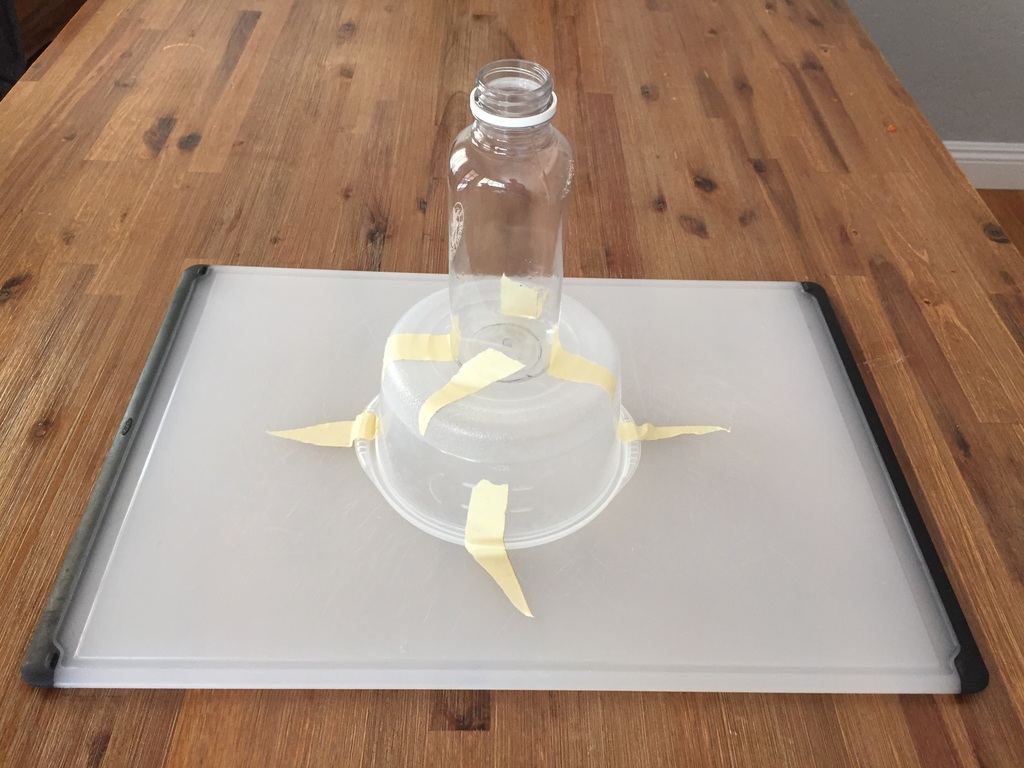 2. If you’re building a smaller volcano, place the bottle straight in the middle of the cardboard. For a larger volcano, take a large plastic bowl you no longer need, and place it upside down in the middle of your cardboard base. Place the soda bottle on top of the bowl. 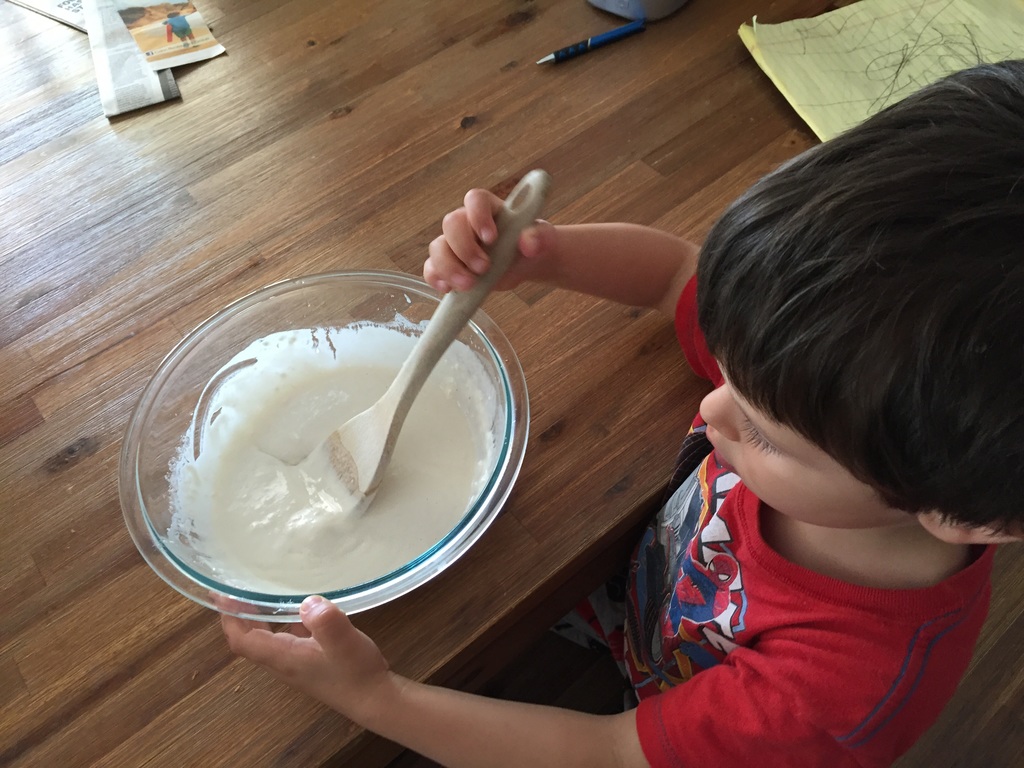 4. Mix one part flour and one part water in a bowl until you reach a glue-like consistency. This is your paper mache glue. 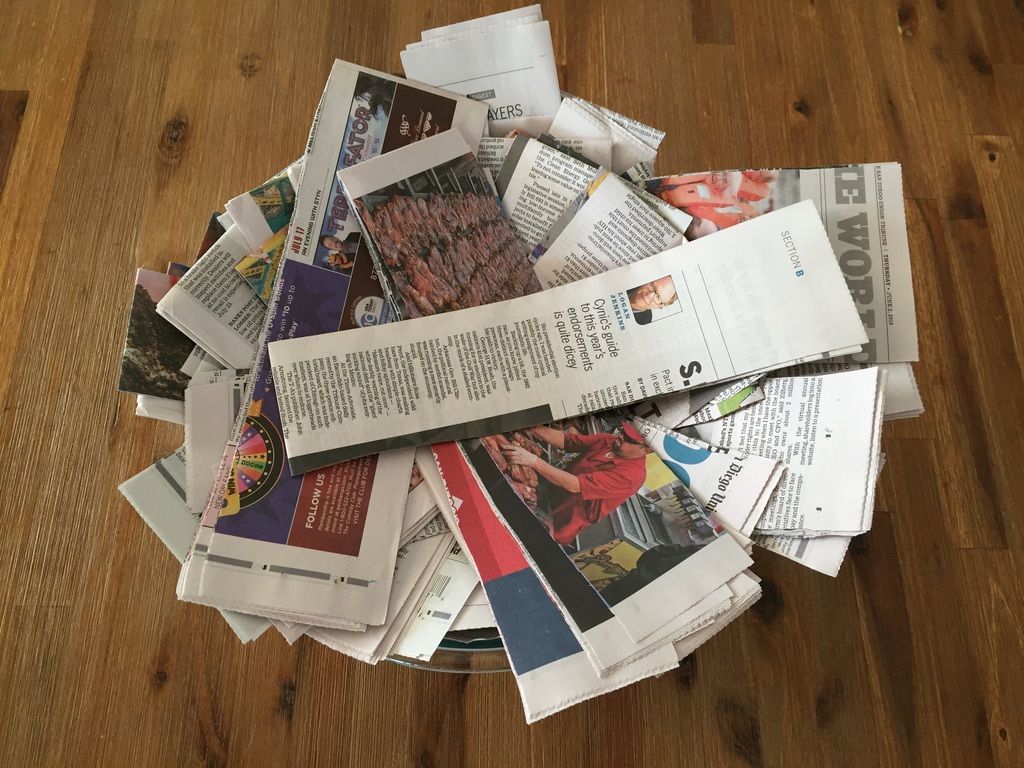 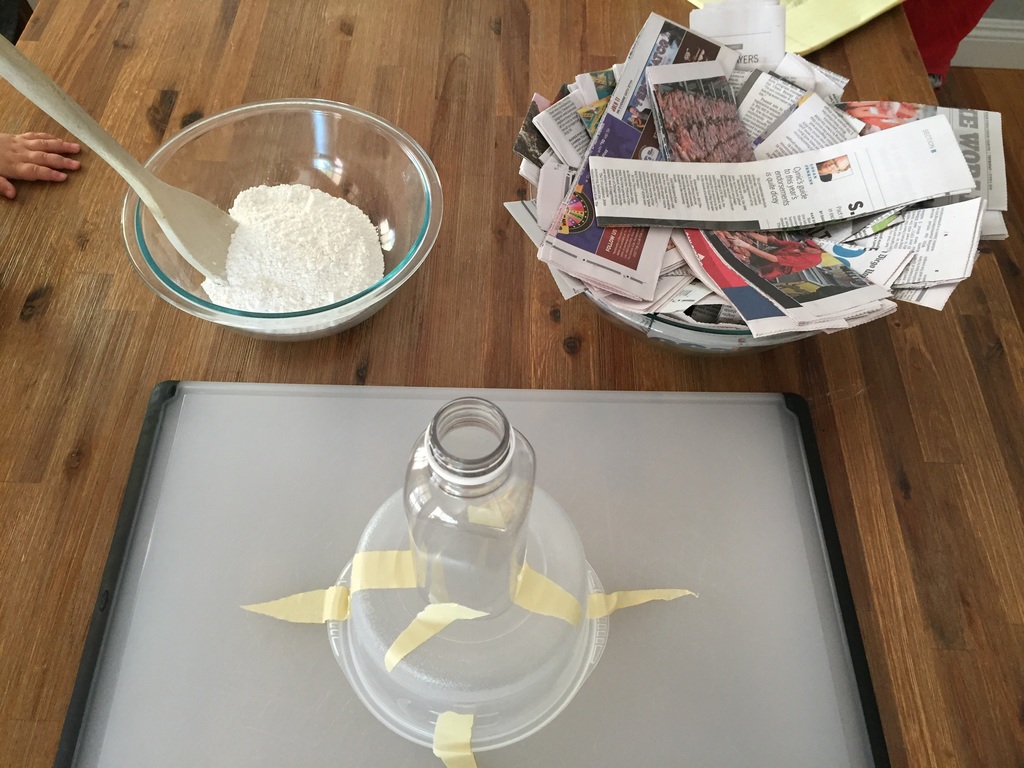 6. Dip newspaper strips into the paper mache glue. Remove any excess glue by running the strip between two fingers.

7. Begin to build the volcano by placing the wet newspaper strips over the masking tape, one piece at a time. Build until you have a volcano shape.

9. The next day, paint your volcano and let it dry overnight again. 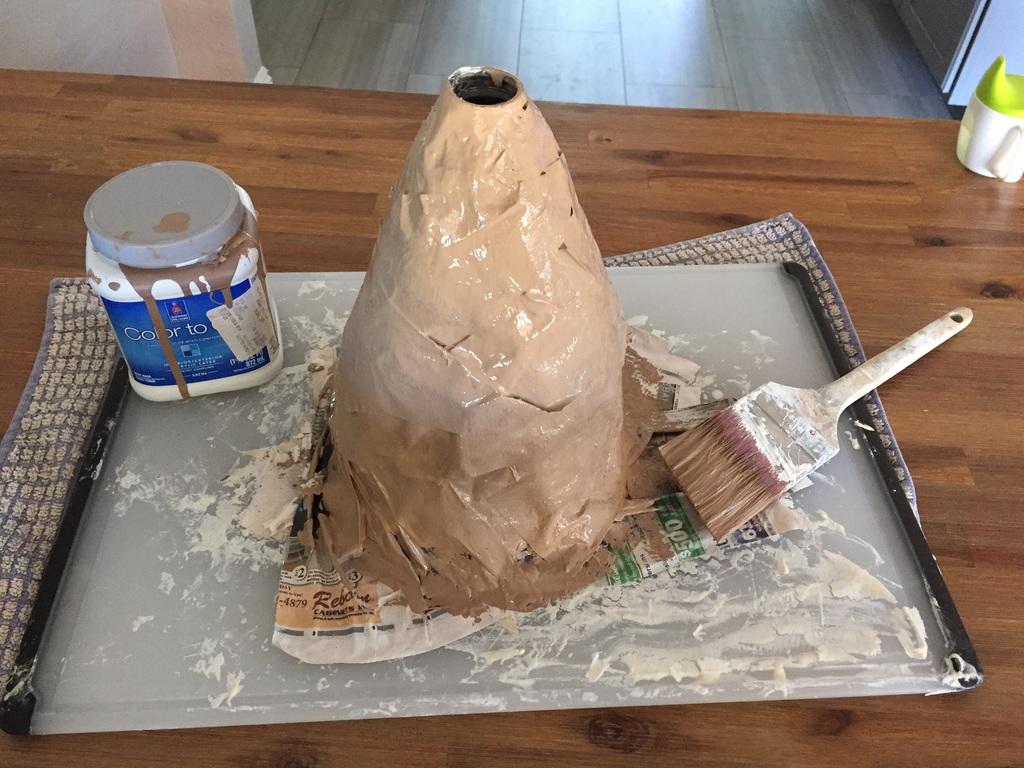 10. You can add toy dinosaurs or trees to spruce up your model! Get creative and use glow-in-the-dark paints to make a space-themed volcano! 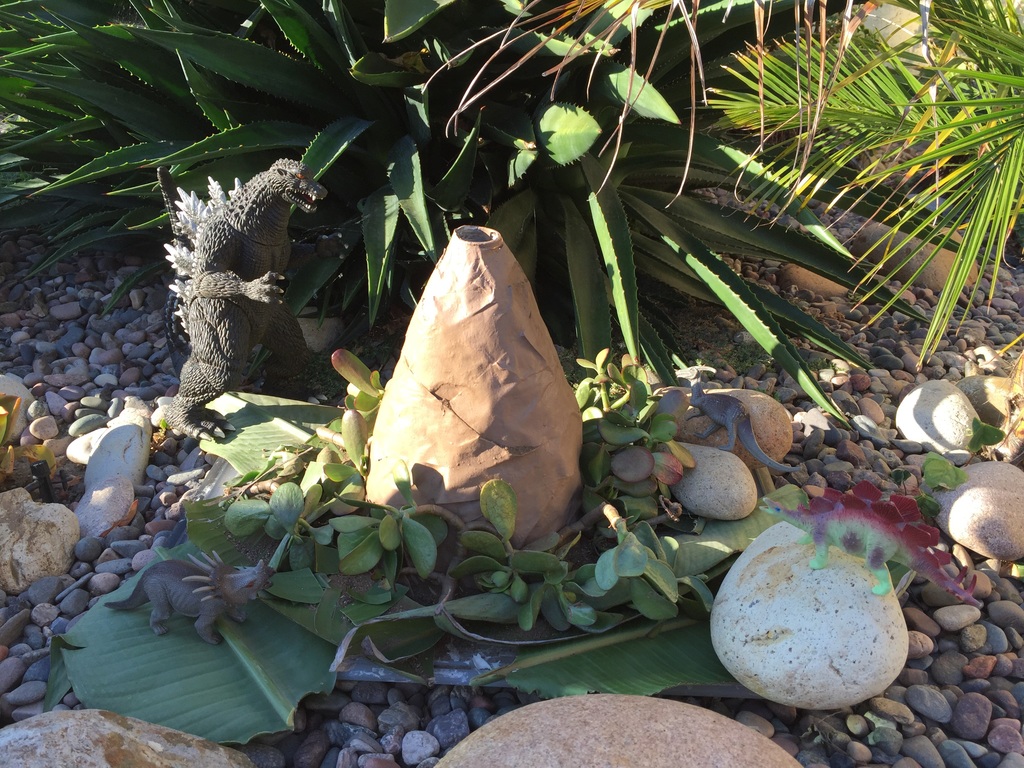 How To Make A Volcano Erupt!

Now for the fun part! Grab your volcano, and head to an area you don’t mind getting messy. Your backyard is perfect!

Voila! You now have an erupting volcano! Wasn’t that a blast?

How To Make A Volcano For Kids Infographic

You don’t need a science fair looming as a reason to make a volcano for kids! It’s a fun and educational activity that the whole family can enjoy. While you’re building a volcano, you can drop some knowledge on volcanology!

How Do Volcanoes Form?

Volcanoes form when heat from deep inside the Earth causes rocks to melt and become magma. As more and more magma is produced, it flows toward the surface.

Once the magma reaches a crack in the Earth’s surface, the volcano erupts! Magma that comes from an erupting volcano is called lava.

There are three categories of volcanoes: active, dormant, and extinct.

You might be surprised to learn that all volcanoes are not the same. In fact, there are four different types of volcanoes! There are composite, cinder cone, shield, and giant caldera volcanoes.

Each type of volcano is very different. Let’s learn more about them!

If you’ve seen a volcano in the movies, it was probably a “composite” or “strato” volcano. These are huge mountains with a smaller crater in the center. Composite volcanoes are created from eruptions that have occurred over thousands of years. They’re called composite volcanoes because they consist of solid lava and volcanic cinders. Some of the most famous volcanoes in history were composite volcanoes, including Mount Vesuvius and Mount St. Helens.

Examples Of A Composite Volcano: Vesuvius in Italy, Krakatoa in Indonesia, Fujiyama in Japan, and Mount St. Helens in Washington, USA. The Cinder Cone Volcano is smaller than its gigantic cousins, and usually spans a mile across and several thousand feet high. It’s made mostly of volcanic cinders, with very little lava flow. These volcanoes usually don’t come to a point at the top. Instead, most of them have craters at the summit.

If you’ve been to Hawaii on vacation, or if you’re fortunate enough to live there, you will probably be familiar with a shield volcano. This type of volcano is low and broad, and although there’s an abundance of lava, there is little pyroclastic material. This makes the shield volcano relatively safe compared to other types of volcanoes.

Shield volcanoes tend to erupt outwards rather than upwards. Unless water mixes with the lava, they’re rarely explosive. Shield volcanoes are found all over the world. The largest and most well-known example is the Hawaiian Islands. The Galápagos Islands, near Ecuador, are also made up of shield volcanoes.

Examples Of Shield Volcanoes: Mauna Kea in Hawaii, Skjaldbreiður in Iceland, Erta Ale in Ethiopia, and Nyamuragira in the Democratic Republic of the Congo.

The Yellowstone Caldera in Yellowstone National Park is one of the most famous volcanoes in the world, even if at first glance it doesn’t look much like a volcano!

However, giant caldera volcanoes, also known as supervolcanoes, are the deadliest volcanoes in the world. Think of the giant caldera as an inverse volcano. An enormous chamber of lava builds up underneath the volcano, creating a bulge under the earth. Cracks form from this chamber, which work as relief valves to release some of the gases trapped underneath the surface.

A giant caldera volcano has never erupted to its full potential while mankind has been around, so we don’t know what to expect when it does. It’s believed that a giant caldera eruption could be the end of mankind.

There have been a few smaller supervolcano eruptions throughout history, which have sent ripples across the globe.

One caldera-forming eruption happened in the year 1257, when Mount Rinjani erupted in Indonesia. This eruption was the largest in the past 2,000 years, and it may have triggered the Little Ice Age.

More recently, Mount Tambora erupted in 1815. The global fallout from the Indonesian eruption caused global temperatures to fall by 0.7–1.3 degrees Fahrenheit. The falling temperatures caused widespread food shortages in the Northern Hemisphere, and 1816 became known as the “Year Without A Summer.”

Have fun building a volcano, and let us know how it goes in the comments!

"You don’t need a science fair looming as a reason to make a volcano for kids!"