Where Have All The Buffalo Roamed?

Approximately 30 million buffaloes used to roam America's grasslands. What happened to them?

Oh, give me a home where the buffalo roam — but wait, are buffalo extinct? Some historians believe that as many as 30 million buffaloes once roamed North America from 1600 to 1870. So, where did they all go?

The American buffalo is not extinct — the species is classified as “near threatened.” However, modern population numbers are nowhere near what they were centuries ago, when New-York Tribune editor Horace Greeley wrote in 1860, “Often, the country for miles on either hand seemed quite black with them.”

Today, there’s little to no risk of discovering that your hometown has been replaced by a carpet of roving buffalo herds. There are approximately 530,000 buffaloes on private and public lands, and roughly 15,000 in the wild.

Also, not to burst your bubble, but the American buffalo is not technically a buffalo. They’re bison. Let me explain. 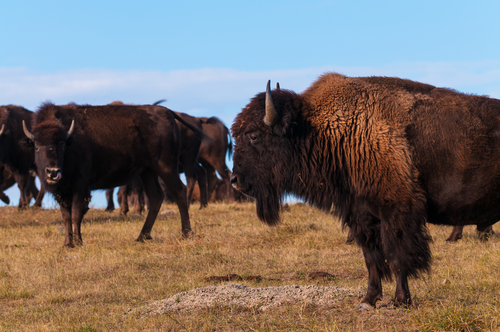 Now, before you start quaking under the cold hand of the truth, know that there’s a ton of speculation to explain the origins of this misnomer. The Greek word “bison” means ox-like animal, and French fur trappers may have used the word “bœufs” (ox) to describe these huge animals.

What Is An American Buffalo, Anyway?

Even though they’re technically bison, we’ll refer to these animals as buffaloes because the name is more widely recognized.

The American buffalo is a heavy, short, hairy animal that loves to graze with its large, low-hanging head. The widely-spaced position of its horns means that the American buffalo prefers to charge its enemies, which is way more brutal than the European buffalo, which fights by interlocking horns.

Because American buffaloes roamed the prairies long before the first settlers arrived, they’re as fiercely patriotic as bald eagles and apple pie. Here are some other reasons that the buffalo should become your new favorite animal:

The Near-Extinction Of American Buffalo 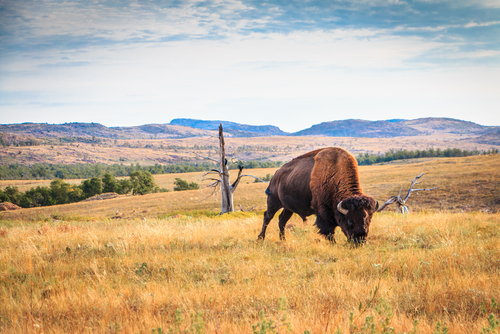 The buffalo played an integral role in the survival of Plains Indian tribes before the 19th century. Aside from existing as a sacred and religious symbol among Native American tribes, American buffaloes were also a vital source of food and materials. Everything from moccasins to paint was derived from various buffalo parts, leading one essay to describe the animal as “the era’s Walmart.”

And then, of course, the 19th century happened — and expanding European-American populations made the American buffalo all but extinct.

Between 1867 and 1884, new railroads made it relatively cheap and easy to transport buffalo hides and other materials. So, hunters flooded the market. They slaughtered a staggering four to five million buffaloes in just three years.

The table below illustrates just how much the buffalo population has changed over the past few centuries.

Today, conservation efforts have brought buffaloes back from the brink of extinction: the largest wild herd (2,500) roams the grasslands of Yellowstone National Park. There's even a thriving buffalo population in San Francisco's Golden Gate Park!

Are Buffalo Extinct? Lessons For The Future

One of the largest takeaways from the near-end of the American buffalo is this: overhunting can have serious ecological effects, and it's an issue that we continue to grapple with today. After all, 95% of modern buffalo live on private lands, where they are raised for meat.

According to Kent Redford, director of the Wildlife Conservation Society Institute and leader of the American Bison Society, “We're not against commercial production of bison, but we created a community that is interested in re-establishing bison as ecological actors on the stage of North American grasslands.” 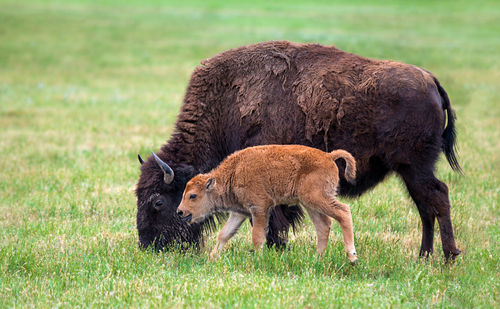 Across semi-arid regions of the continent each year, grasses produce roughly one-third more growth than will naturally decompose. That excess grass chokes the soil, which prevents healthy plant growth. Grazers eat that excess grass, and their hooves help bury seeds and aerate the soil.

Grazers like the mighty American buffalo ensure the health of our environment by restoring the ecology that used to exist on America's extensive grasslands. Redford explains to Live Science that free-roaming buffaloes could encourage other species to follow “that formerly lived on the prairie, from plants to birds to wolves — even grizzly bears.”

"Every time you sang about buffaloes in 'Home on the Range,' you were singing about lies."

Get Gorgeous Results With These 15 Ways To Use Coconut Oil December 8th, 2016

The two basic items necessary to sustain life are sunshine and coconut milk.