For those who enjoy camping, but still want a fully charged phone so you can take pictures of the scenery.

To novices, “camping” sounds like one type of outdoorsy activity. But veteran tent pitchers know that campers exist on a spectrum.

On one extreme, you have the luxury campers. They use their abundant disposable income to buy fully furnished, 50-foot recreational vehicles so they can enjoy watching their curved OLED TV in untouched landscapes. On the other extreme, you have Grizzly Adams types. They like to escape from civilization for a week at a time with nothing but a knife, a copy of Survive! by Les Stroud, and a loincloth.

But then, there’s the majority in the middle. We are the people who want to enjoy unexpected encounters with wild animals and fresh air while simultaneously listening to music on our portable stereo, (-or phoning the local ranger station if those animals mistake us for a snack). In other words, we want to get away from it all — as long as “all” doesn’t include electricity. 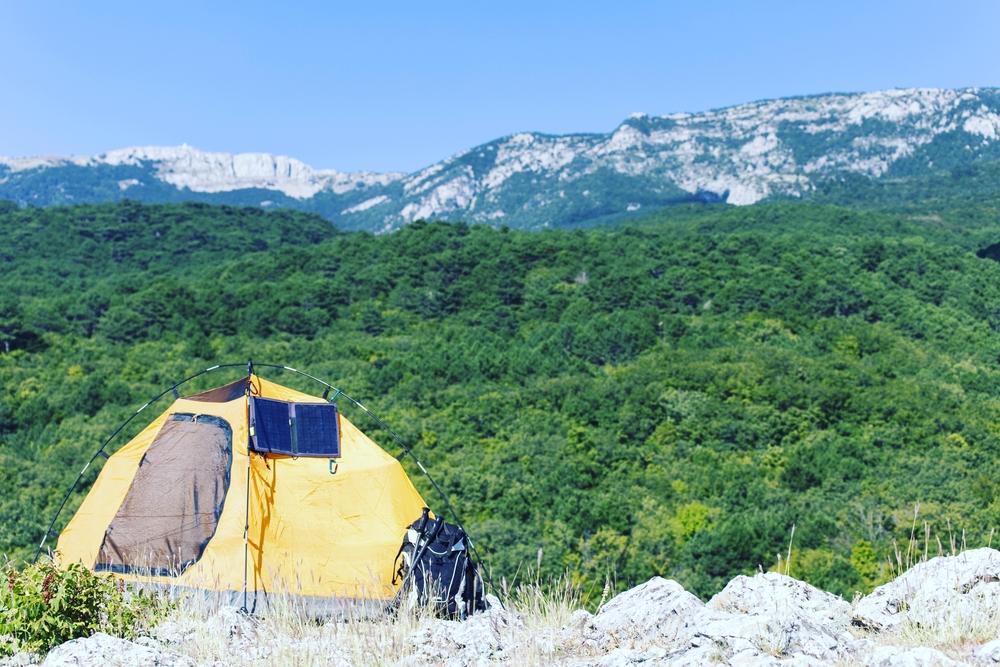 The old way to bring power to remote areas was to either drive one of those pricey RVs or haul a bulky and loud gas generator. But as solar technology has improved, more companies are offering solar powered tents — which means built-in charging features. This extra convenience has the potential to introduce more people to the joys of sorta roughing it.

If you want to enjoy the beauty of America’s natural wonders and still be able to charge your iPhone, here are a few cool solar tents you can buy (and one you can’t quite yet).

Cinch is the product of a successful Kickstarter campaign. Unlike most other tents on this list, it’s a simple pop-up tent. Just pack it into the compact, disc-shaped rucksack, travel to your own vision of “life away from civilization,” and set it up. The solar pack is an optional upgrade, but it includes a solar panel and LCD power bank that can store enough energy to charge your cell phone.

Looking for something a little more hardcore? This tent, designed for military use, might be more up your alley.

The Tactical Solar Tent combines rugged shelter and abundant energy supplies. You’ll get enough energy to charge your phone and then some: the large panels draped across the roof the tent supply up to 1440 watts of power. That’s enough to power your hair dryer on “high” — though using a hair dryer in a Tactical Solar Tent might take away some of its ruggedness.

Have you ever wandered back to your camp area at a music festival, still a little delirious from the (let’s say) music, and been confronted with a sea of nearly identical-looking tents? Lots of people have. That’s why the Bang Bang Solar tent was specifically designed for festivalgoers who want to stand out from the typical shades of green, blue, and black. These four-person, portable tents come in colorful patterns so you can spot yours in an instant.

Plus, they come with a solar charger, so both you and your phone can charge up during the night in order to Instagram the performances the next day.

Related: Why Sustainability Issues Are On The Lineup At Music Festivals

This one is technically only a concept. But it’s too cool to not include.

The Orange Solar Tent was also conceived to help live music enthusiasts, as illustrated by this rocking demo video.

The tent features three adjustable solar curved solar panels that cover the tent. They give people the power they need to charge their phones, and the panels use surplus energy to power the festival. It even glows orange at night, making it easier to find your way back to the tent. Kaleidoscope, the maker of the concept tent, says the Orange Solar Tent isn’t for sale. No word on if or when it will be in production.

This much-hyped collaboration between Goal Zero and Eddie Bauer appears too good to be true. It got a lot of press when the concept announcement dropped in 2013, but it’s been crickets ever since. Unfortunately for us, this solar tent is no longer available, if it ever was in the first place.

Why list it if it’s unavailable? If you’re researching solar powered tents, there’s a good chance you’ll stumble upon this one and wonder where to find it.

If you’re a serious backpacker, this collaboration is the solar tent of your dreams. The Katabatic is built for the most rugged expeditions, like climbing Mount Everest, and the Sherpa 50 holds enough power to recharge a laptop.

If you want to try and recreate it, you can purchase the Katabatic tent and Sherpa 50 solar kit separately. 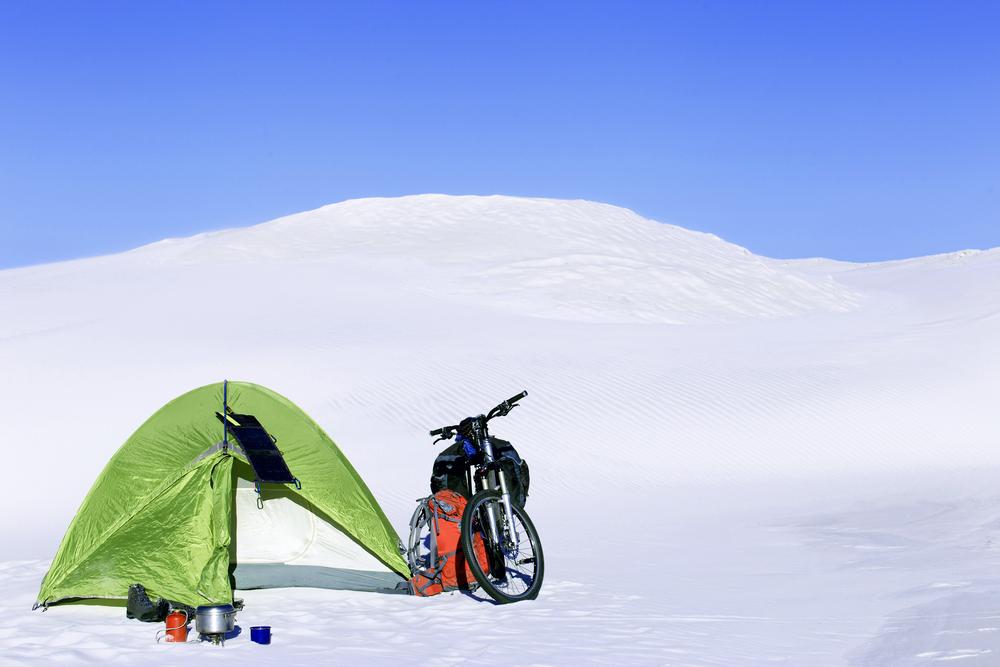 Want To Add Solar Power Without A Tent?

Of course, there’s no need to actually buy a brand new tent. If you already have a favorite tent that you throw into the back of your car when you’re ready to head into the mountains, you can buy a portable solar pack.

Some of the most popular solar packs are produced by Goal Zero. If you just want to power your cell phone with help from the sun’s rays, get the Switch 8 and Nomad Kit. It’s affordable (around $80) and will ensure that you can power small devices as long as it’s bright out.

If you anticipate larger power needs, get the Sherpa 50 Solar Kit. It includes a solar panel and battery large enough to power a laptop or tablet.

But if you want as much power as you can take with you, get the Yeti 400 Solar Kit. At over 30 pounds, it’s not “portable” in the sense that you can stick it in your pocket. But if you lug it to your campsite, you’ll have all the power you need to party all night (assuming it was perfectly sunny the previous day).

"When most of us go camping, we want to get away from it all — as long as “all” doesn’t include electricity. "

Upgrade your home’s garage door and curb appeal with recycled and eco-friendly materials.

How To Use Tea Tree Oil For Hair That Would Make Beyoncé Jealous January 9th, 2016

With the time and money you’ll save by using tea tree oil, you’ll be able to splurge on everything you need to make your hair Bey-worthy.