Reliably charge your devices with the power of the sun using these solar phone chargers.

Why would you need a solar powered phone charger? Odds are, your life is already filled with cables: specialized chargers that only work with certain devices, stretches of wire that fray at the ends, and an endless tangle of dongles that never connect to your device on the first try.

Why not get rid of all those cables and use a single charger instead?

Solar powered phone chargers provide a reliable way to harness the power of the sun. But they’re also convenient when you anticipate that you’ll be without a power source for any amount of time, like if you’re going camping or preparing for the end of the world. You know — basic weekend activities. 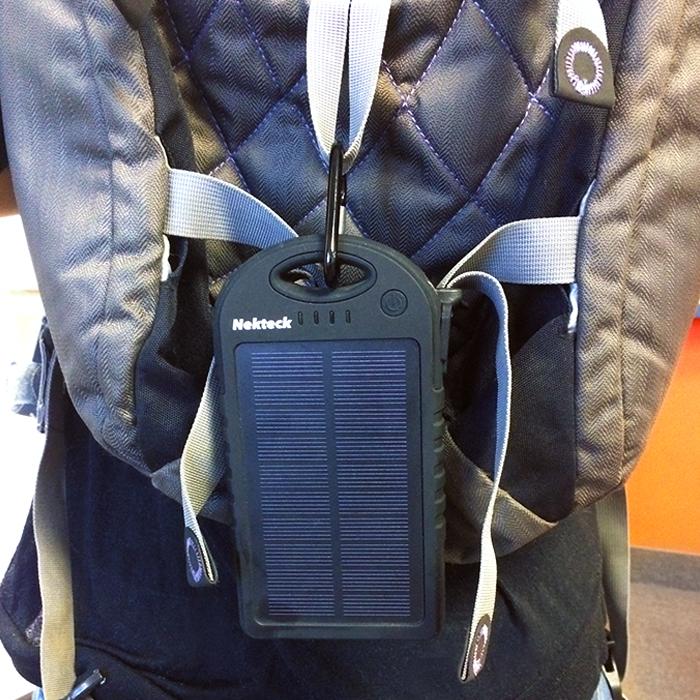 But how do you know which charger will actually power your devices quickly, reliably, and without failing just because of a little cloud cover? To answer that eternal question, we searched through the top-rated devices on Amazon to bring you a list of the best solar powered phone chargers available today. We also reached out to a few avid hiking enthusiasts for their two cents.

Our list is below, but before you get started, here are some basic specs to keep in mind as you shop.

What Is A Solar Powered Phone Charger?

To decide which charger is the best for you, you need to understand how they work in the first place. (This is less of a science lesson and more of a “buyer awareness” lesson.) Generally speaking, there are two types of solar chargers for phones and tablets:

The type you get depends on how you want to use it. Portable batteries can be great if you’re concerned that you might not get a ton of sunlight throughout the day. You can just load up the battery on a sunny day and forget about it. 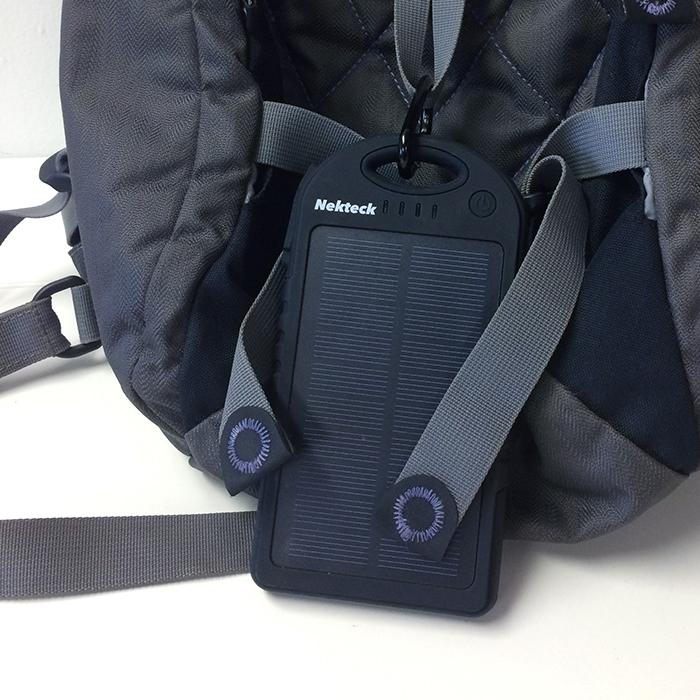 On the other hand, devices that plug directly into your phone or tablet can be convenient because they have fewer parts, and you can use them to top off your charge as you go. If you’re a clumsy mess like me, the direct-charge style might be more realistic.

Your Solar Phone Charger Needs This Amount Of Amps

Whatever you do, make sure you’re shopping for a charger with the correct specifications. Otherwise, it’ll take approximately forever to charge your device with a solar phone charger (if it charges at all).

In terms of amps (A), most tablets draw 2 A, and phones draw about 1 A. Meanwhile, wattage (W) can vary: some mobile solar chargers can generate up to 20 watts, but anything around 10 watts will give you enough juice to power your phone in a few hours.

And yes, I said hours. As awesome as solar power is, it takes its sweet time.

Should You Just Buy A Battery Pack? 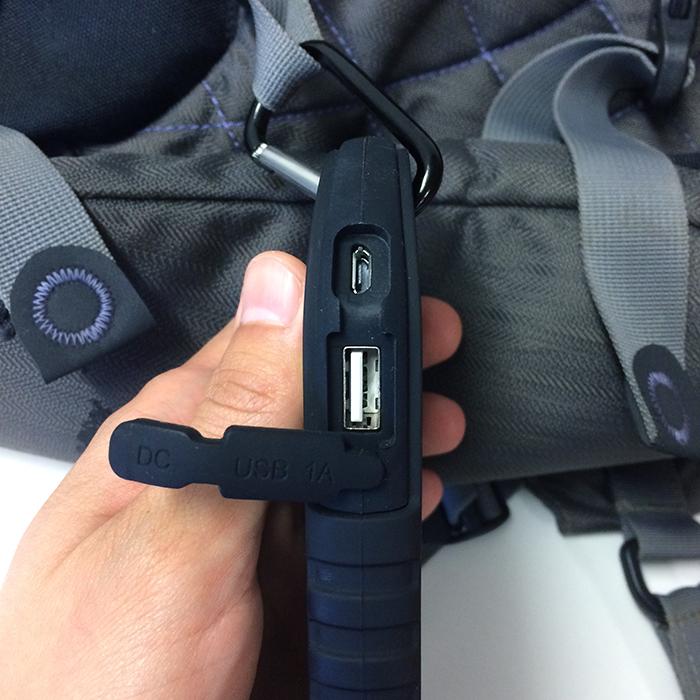 Today’s solar powered phone chargers require a few hours to convert sunlight into electricity, and another few hours to charge your device. It’s faster to plug into an electrical outlet, which is why some poser-solar chargers can also be plugged into your wall to charge.

Consider the iBeek Portable Solar Battery Charger Power Bank, which is currently a #1 best seller in cell phone solar chargers on Amazon. It retails for $21.99, but the product description comes with the following disclaimer: "The efficiency of energy transformation from solar to electric energy is really low … We suggest you recharge it via wall charger at the beginning to make the power battery fully activated.”

So, basically, it’s a battery case that happens to have solar powered functionality. But don’t hold your breath. With that kind of disclaimer, you’re better off just purchasing a regular ol’ USB battery pack, which you can find for about $20.

For our purposes, we’re looking at the real stuff: a solar powered phone charger that is efficient, reliable, and is actually powered by sunlight — none of this wall outlet nonsense. These chargers are built to capture as much sunlight as possible, so they’re designed to be spread out on the ground (or any other sunlight-capturing surface).

In the quest to find the best of the best, here’s what we found. All prices are accurate at the time of publication.

Solar Powered Phone Charger: The Best Of The Best

The SunnyBag Leaf+ produces just 6.2 watts, which is a few watts below other selections on this list. But under direct sunlight, it’s still able to fully charge a cell phone in two hours, and it’s compatible with any mobile device that can be charged via USB port.

This solar charger is designed to produce an impressive 10 watts to power your gadgets. It can easily be attached to a backpack, and since it weighs in at just 11 ounces, you’ll barely even notice it’s there.

While this device was highly rated by our audience, it isn’t available for delivery outside Europe.

Suntactics has been “proven” by long-distance hikers, according to one expert. The company offers a two-year warranty on its solar chargers, and we love that their products are made in the USA. Here’s what you get with the sCharger-5:

Suntactics also offers models with higher output, which are ideal for disaster preparedness or simultaneous charging.

Sure, it isn’t sexy. But Anker doesn’t care because it knows it’s the best. With 4.6 out of 5 stars and over 285 reviews, the Anker PowerPort Solar both kicks butt and takes names. This is why it’s hot:

The Anker PowerPort Solar does all this while weighing in at just 14.7 ounces, which means that it’s great to carry in a backpack while you’re trekking out in the wilderness. When every ounce of weight counts, you shouldn’t have to worry about your solar charger.

With 4.6 out of 5 stars and an impressive 865 reviews, this solar charger from RAVPower offers a winning blend of efficiency and convenience. Here’s what makes it great:

However, the RAVPower Solar Charger isn’t our top pick because, at 23.9 ounces, it’s a little heavier than the Anker PowerPort. If you’re just carrying around the device for backup use, that difference won’t be a huge deal — but if you’re carrying it around on an all-day outdoor trek, those extra ounces can be a dealbreaker.

This device hits the closest to a perfect score: 4.7 stars out of 5, with 385 customer reviews. It suffers from a less-than-glamorous name, but its specs speak for itself:

The Nekteck isn’t as compact or lightweight as other options on the market, but its reviewers are notably happy campers. One reviewer writes, “A must have for any hiker/camper. They say for a portable solar charger, you need to get at least 14W for it to charge in a timely manner. This one is 20W and charges fast.”

At 4.3 stars out of 5 stars on Amazon and a stellar 9.15 out of 10 on Top Ten Reviews, the Voltaic Amp is a small, but mighty solar phone charger.

The Voltaic Amp's sturdy solar panels are coated in urethane, which makes it easy to keep them clean — and you can trust that they'll last during your travels. We love that it's small enough to be portable, but large enough to protect any electronics you store inside while they charge. It's not the cheapest solar powered phone charger, but it's definitely one of the quickest — and in a crunch, that could be a deciding factor.

Currently, solar powered phone chargers fit the needs of a specific audience: people who expect to be without power outlets for an extended period of time. So, they’re popular among hikers and campers — but what about users who just want to lessen their reliance on the grid?

At the pace of renewable energy development, odds are high that we'll see even more efficient solar powered phone chargers in the near future. Once those chargers get your devices to 100% faster than wall outlets can, we can imagine a cordless future — or, at the very least, a future with fewer charging cables.

Do you own a solar powered phone charger? Tell us about it in the comments!

This article has been updated with expert insight and recommendations.

"Anything around 10 watts will give you enough juice to power your phone in a few hours."

How We Can Create Jobs While Protecting The Planet February 1st, 2017

If “America First” were more than a slogan to Trump, he would double down on solar instead of trying to save fossil fuel jobs.