You can roast potatoes, bake cookies, cook chicken, and a lot more with a solar oven.

Cooking with fire is cool, but if you really want to do something impressive, prepare you food with a solar oven. Think about it: you can take solar rays travelling 92 million miles through space, and then concentrate them to cook your chicken breasts to perfection.

If you want to cook with a solar oven, here’s what you need to know.

You don’t actually need silicon-based photovoltaic solar panels in order to create a solar oven. All you need is something reflective in order to concentrate the power of the sun and something to cook your food.

That means that it’s possible to build your own solar oven, usually with stuff from around your house (and possibly one cheap visit to your local hardware store).

Here’s how to put it all together. 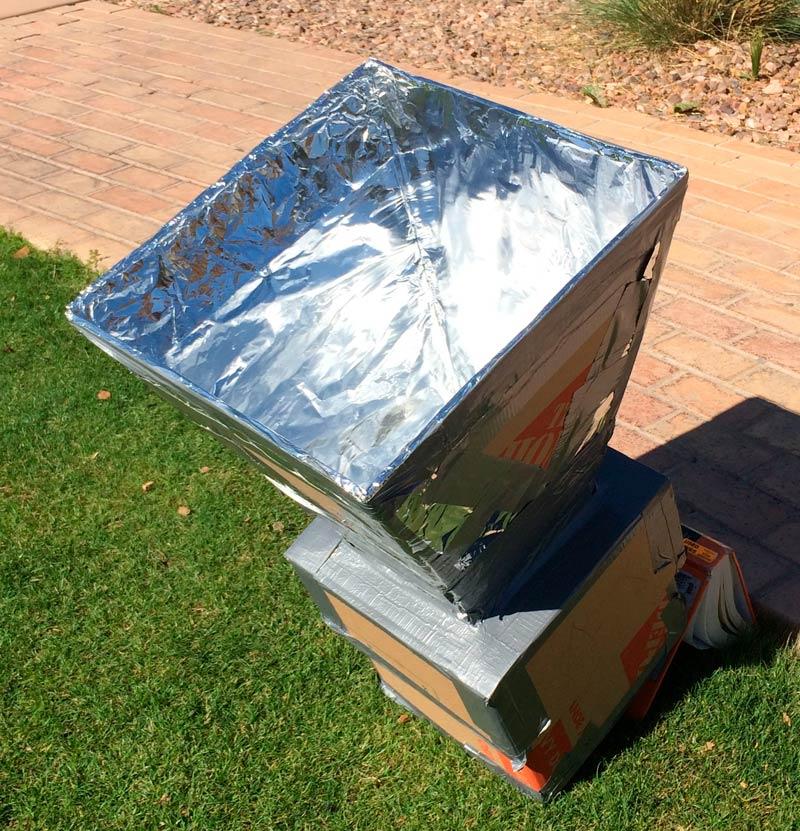 That’s basically it. As long as the sunlight is going straight into the oven, then it will get hot enough to cook your food.

If you don’t feel like going the DIY route, you can also purchase a solar oven online and at most hardware stores. While most commercial solar ovens are variations of the “box oven” described above, some companies have also produced more innovative models.

For example, the Gosun solar oven lets you cook food in a solar-heated vacuum tube. This allows the oven to reach hotter temperatures than typical solar ovens, allegedly up to 290°C.

These models are a bit more expensive than typical solar ovens (the cheapest models start at $279), but they have earned a fair amount of press and industry attention. The GoSun was recognized with an “Innovation Award” from CES in 2016.

How To Cook With A Solar Oven

While a solar oven doesn’t get as hot as the oven you use in your kitchen, it can still get hot enough to cook your food. Typically solar ovens reach temperatures of 150°C (302°F). You should use all the same precautions you would with a conventional oven, such as using oven mitts when handling anything inside.

Here are a few tips to get the most out of your solar oven.

What Can You Cook With A Solar Oven?

Most food cooked in a conventional can also be cooked in a solar oven. Here are a few ideas to get you started.

Declutter And Zen Out With A Few Easy Steps Towards Minimalism February 16th, 2016

Minimalism isn’t about “going without” — it’s about getting more for less.