How Insulated Concrete Forms Give Your Home Rock-Solid Energy Efficiency

Solid concrete does more than just keep your energy bill down.

Your home’s energy efficiency is partly decided by the time the blueprints are drafted. Being smart about your energy use can slash your energy bill (and your carbon footprint), but your home’s insulation has just as much of an impact. Most homes are insulated with materials like fiberglass, mineral wool, and polyurethane foam. But a much tougher material is gaining popularity: concrete. The same stuff you use to create your driveway is surprisingly effective at keeping the temperature in your home stable.

These homes use insulated concrete forms (ICFs) — flat blocks of concrete that are cast in your house’s wall during construction and replace your wooden frame. First, foam connector or web separates other insulation materials, and concrete is then poured in the cavity. 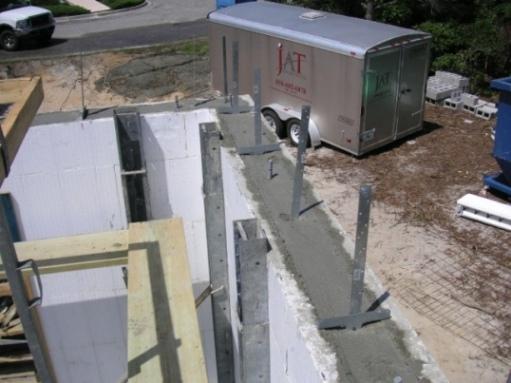 Here are some of the coolest benefits of insulated concrete forms.

1) ICF Homes Are More Efficient Than Other Insulation Materials

Most homes aren’t as well insulated as they should be because of “thermal bridging,”  which occurs when certain areas of a building allow more heat to pass through them than others. Even if most of your home traps the temperature as well as a thermos, it doesn't help you if heat can pass unimpeded elsewhere.

But fortunately, insulated concrete forms can cut down on thermal bridging. Dense concrete can insulate both sides of a wall, keeping the heat where you want it to be. According to the US Department of Housing and Urban Development (HUD) report Costs and Benefits of Insulating Concrete Forms for Residential Construction, ICF homes are verifiably more effective than wood-framed houses and enjoy 20-25%savings in annual heating and cooling costs.

Ever live in a home with thin walls? It’s frustrating to try and enjoy a quiet evening at home when it seems like you can hear every honking horn in your zip code. But if your home is made with insulated concrete forms, you can turn down the volume of the world. In fact, it’s so quiet, you’re one step closer to living in a home soundproofed enough to record that album that you’ve been thinking about.

That same HUD study also looked at the effectiveness of different housing materials. The metric for home soundproofing is Sound Transmission Class (STC). An STC of 25 means that you can easily hear a normal conversation on the other side of the wall. An STC of 45 means that loud speech is barely heard, and an STC of 55 means that you can't hear someone at all — even if they're shouting.

3) ICF Turns Your Home Into A Fortified Fortress

Hardened concrete is as tough as it gets. If the three little pigs had a fourth brother who really wanted to protect his home from whatever the wolf could dish out, he would’ve built his home with insulated concrete forms.

The unique resilience of concrete means that ICF homes are more likely to survive hurricanes, earthquakes, and whatever else the worst of Mother Nature throws at you. To give you an idea of how tough it is, take a look at this photo of an ICF-fortified home that survived a tornado. 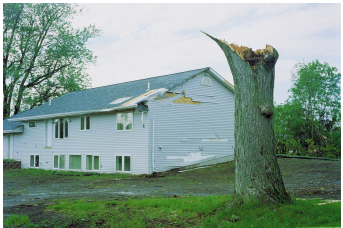 Note how poorly the tree dealt with the disaster.

On top of that that, homes built with ICF are also more resistant to fire. The famous non-flammability of concrete means that homeowners might have a few extra minutes to escape their home if the worst happens.

Deterioration is a part of home ownership. Regardless of how solidly your home is built, you’ll eventually have to make a few calls to your local contractors in order to repair the natural effects of decay. But with insulated concrete forms, you might need to deal with house maintenance less often.

HUD reports that there is insufficient data to compare the actual durability of ICF homes. But taking what we already know about concrete construction, we can confidently say that homes built with concrete can stand strong and last long. As HUD puts it: “over other homes, concrete is able to maintain its structural capabilities over a long period of time and extend the life expectancy of buildings.

The Future Is The Past

"If you have a highly soundproofed ICF wall, you’ll sleep fine even if your neighbor has an “air horn and Slayer karaoke” party."

How Climate Change Could Spark The Next Financial Crisis October 24th, 2016

Listeria leads to listeriosis, a serious infection that can be deadly for pregnant women, newborns, older adults, and adults with weakened immune systems.