Without A Paddle: Protecting America’s Waters In The Age Of Trump

We ask Surfrider’s senior scientist, “What’s the worst that could happen?”

If politics is a game of chess, voters didn’t just change the pieces for 2017; they changed the board.

Recent history has never experienced a leader quite like Trump, from his stance on climate change (a “hoax”) to … well, everything else. Maya Angelou once said, “When someone shows you who they are, believe them.” Should President-elect Trump double-down on his stance against environmental issues, as he has promised throughout a turbulent election season, the fallout will be catastrophic for our planet’s health — and, specifically, the ocean and water supplies that millions of Americans depend on.

It’s estimated that approximately 39% of Americans live near the coast, and ocean recreation is a major driver of the US economy. One study revealed that beaches bring in $320 billion dollars annually to the national economy.  The cost of maintaining them is less than 4% of the annual park budget.

So what’s the worst that can happen to our coasts in the next four years? Green Future spoke to Rick Wilson, a Senior Scientist for the Surfrider Foundation, who has spent 36 years with the foundation. After graduating from Stanford, Rick has been an active member of beach water quality groups and coastal coalitions, and has served on various committees regarding surfer health, wastewater recycling, and beach monitoring.

We asked him what he was most concerned about under a new administration, and how we can continue to defend our coasts — no matter who sits in the Oval Office.

Green Future: From a scientific perspective, if a new Trump administration implements some worst-case scenarios, such as pulling the BEACH Act and other important funding, what are some potential consequences that we would see come into play first?

Rick Wilson: “We are definitely concerned about the Trump administration pulling funding for the BEACH Act, which funds beach water quality monitoring and public notification programs in all coastal and Great Lakes states. Without this funding, states would have to reduce the number of beaches they test and/or the frequency of testing.

Some states like Oregon and Florida are 100% dependent on BEACH Act funding and might have to stop their programs.  Here in California, we're a little bit better off.  The state and our coastal counties provide the majority of the funding for beach monitoring, but some cutbacks could occur. Regardless, without BEACH Act funding, the public would not know if water at the beach is safe, and it would be more difficult to identify and eliminate pollution sources.”

Established in 2000, the BEACH Act was signed into law as an amendment of the Clean Water Act (CWA). In addition to monitoring water quality, the act also expanded the definition of “coastal recreation waters” to include the Great Lakes and estuaries designated for swimming, bathing, surfing, or other recreational water activities. The BEACH Act allows the EPA to allocate funds for beach monitoring and assessment programs.

Trump, and the GOP at large, has used the EPA as a political punching bag. Should he gut the EPA, the CWA and the BEACH Act would likely be defunded. Coastal areas are already threatened by the presence of harmful pathogens, but with free reign to dump toxic chemicals into the rivers and oceans, water sports could become a thing of the past. Rivers wouldn’t fare much better; in pre-EPA times, the Cuyahoga River in Ohio caught on fire ... a couple of times.

When reporter Richard Ellers visited the ignited river in the 1960s, his photographer encouraged him to dip his hand in the river to see how polluted it was. When he pulled his hand out from the slick waters, this was the iconic photograph that helped prompt an environmental movement aimed at protecting water quality:

RW: “We're also very concerned about the possible resumption of offshore oil drilling. New offshore oil drilling in California has been banned since the disastrous oil spill near Santa Barbara in 1969. Trump could potentially open up California and the entire West Coast to oil drilling, as well as the East Coast (where oil drilling has never been allowed) and the fragile, storm-tossed Arctic regions.  We don't need a repeat of the Deepwater Horizon disaster that slimed the Gulf of Mexico and its beaches in 2011.” 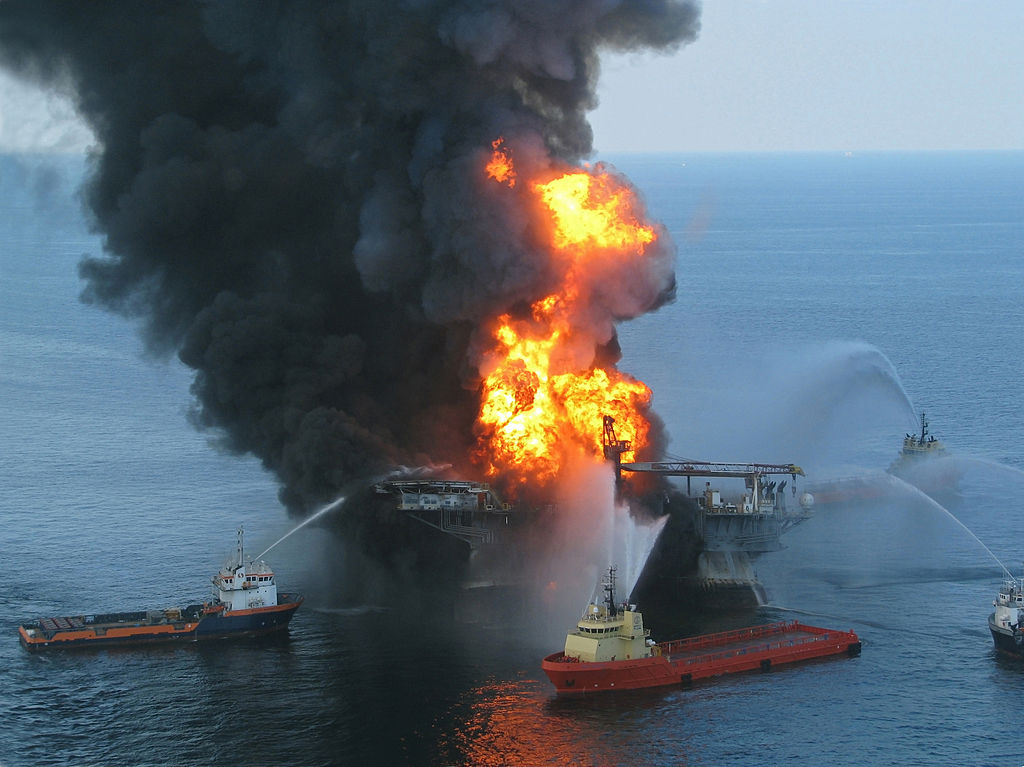 It’s been six years since the Deepwater oil rig exploded, hemorrhaging 210 million gallons of oil into the ocean over 87 days. The Gulf Coast is still reeling from the fallout, and we’re still unsure exactly how the oil spill will impact the region in the long term. Recent studies have shown that BP oil has entered the food chain of local birds, and an unrelated study has concluded that a dramatic portion of the coastline has been lost due to the spill.

If offshore drilling is implemented on both coasts, it’s only a matter of time until more disasters like Deepwater Horizon occur. This could mean that both coasts may suffer the same fate as the Gulf.

RW: "We're also concerned about the future of the National Ocean Policy, which is designed to protect our ocean resources and encourage planning to balance competing uses of our ocean areas. Scuttling this policy could encourage industrialization of the ocean and impact both marine life and recreation areas.”

Trump has mused over the idea of rescinding all of Obama’s executive orders after he takes office. The National Ocean Policy is one of those executive orders. President Obama recognized the dire shape of the ocean’s ecosystems, evidenced by the near-extinction of coral reefs and widespread loss of marine life, and called for a National Ocean Policy to defend ecosystems and prioritize the health of the ocean over other interests, such as ocean industrialization.

Even if the Trump administration walks back on some of his hard line rhetoric about climate change, there is little doubt on either side of the political abyss that a Trump administration will prioritize cold, hard cash over the cold, dead body of planet Earth. Without the National Ocean Policy in play, expect the oceans to become heavily industrialized. The process has already begun: overfishing is already depleting the marine ecosystem. But once all existing restrictions are out the window, the idiom “plenty of fish in the sea” may no longer apply.

RW: “Surfrider is a strong supporter of EPA's Clean Water Rule that protects our beaches by protecting water quality in the rivers, lakes and streams that flow to the ocean. We are concerned the Trump administration may bow to industrial, agricultural, and development interests who want to weaken or eliminate this rule.”

The detrimental effects of toxic water runoff are evident in Southern California, where water recreation is abandoned for days after rainfall due to an uptick in pathogens like the norovirus infiltrating coastal waters.

Aside from contracting a range of illnesses and diseases from water contact, one in three Americans drink water from streams that are protected by the Clean Water Rule. Without oversight protecting water supplies, water crises like those in Flint, Michigan may become frighteningly common.

What Can We Do?

This caustic election season has left many people feeling helpless. With Trump’s cabinet lining up to be a compendium of environmental nightmares, the urge to give up and start mainlining absinthe is understandable. But Surfrider isn’t giving up, and neither should you.

Dr. Chad Nelson, CEO of Surfrider, released a statement shortly after the election results. In it, Nelson confirms the organization’s commitment to ensuring the protection of the vulnerable coastline, and reflects on the plight of nature’s protectors from around the world:

“When talking to long time friend and colleague, Luis Jorge Herrera Rivera, the Goldman Prize winner who protected the Northeastern Ecological Corridor after decades of fighting and setbacks, I asked how he carried forward. He responded, ‘What is the other choice?’”

Rick Wilson breaks down some proactive ways for ocean lovers to get involved with protecting their coastlines:

RW: “We encourage anyone who cares about protecting and enjoying the ocean, waves, and beaches (our mission statement) to get involved with Surfrider by becoming a member, supporting us financially, or volunteering at the local level.

In San Diego County, our chapter has many programs and volunteer opportunities, including beach cleanups, addressing the border sewage problem, stopping plastic pollution at its source, certifying ocean friendly restaurants, creating ocean friendly gardens, and much more. Regardless of who's in the White House, our San Diego Chapter and our other 84 chapters along the coasts of the US are working to protect the ocean and beaches so that we can all continue to enjoy them.”

If you live in the coastal US, click here to find a Surfrider chapter to join near you.

"I asked how he carried forward. He responded, ‘What is the other choice?'"

Tesla’s claims threaten to overshadow the real progress that other companies have made in the race to create a sustainable future.