Obama On Climate Change: "We're In A Race Against Time"

Admit it: Obama is a cool president. He shares playlists on Twitter, he goes deadpan on Between Two Ferns, and now he’s having a house party — or a White House party, if you will.

Inspired its namesake, South by South Lawn (SXSL) is a day-long event which will have musical performances, interactive booths, exhibits, film screenings, and discussion panels centered around fostering innovation and bringing lasting change to our country. In a blog post on Medium, President Obama wrote:

“Much like the festival I dropped by in Austin earlier this year, SXSL is, at its heart, a call to action. The folks out on the lawn today are artists, creators, entrepreneurs, and innovators who will share how they’ve used their unique skills to engage their communities in making the change they want to see — whether it’s curing cancer, fighting poverty, empowering women, and so much more.”

Just a few of the interactive exhibits taking place:

6x9: A virtual reality exhibit on solitary confinement to demonstrate why the inhumane treatment should be banned. The viewer will experience the psychological impacts of long-term sensory deprivation such as blurred vision, hallucinations, and a sense of floating.

Find Your Park Machine: A digital wayfinding sign that uses audio, visual, and geo-location elements to give guests the chance to experience all 400+ of America's national parks in just 60 seconds!

Round Robots: A collaboration between Black Girls Code and Sphero gives visitors the opportunity to program and play with spherical robots.

To-Do Note Installation: A sticky note installation where guests can write down their plans to make a positive impact in their community. This exhibit was created by Illegal Art group.

Other Events At South By South Lawn

- Musical performances by The Lumineers, Sharon Jones and the Dap Kings, and DJ Beverly Bond.

- Panel discussions with industry leaders on some of society's most pressing topics. Topics include technology, sustainable agriculture, social justice, and how individual citizens can bring change to our country.

-DiCaprio will screen his climate change documentary Before The Flood.

In the feature event, President Obama held a panel on climate change with climatologist Dr. Katharine Hayhoe, with Leonardo DiCaprio acting as moderator. DiCaprio opened the conversation with this golden soundbite:

The crowd erupted after the thinly-veiled jab at Donald Trump — and it was only the first of several applause breaks during the discussion. DiCaprio asked if our planet has the ability to recover, or if the damage is past the point of regeneration, President Obama said:

"We’re seeing climate changes at the more pessimistic end of the range that [was] anticipated by scientists. So we’re really in a race against time." 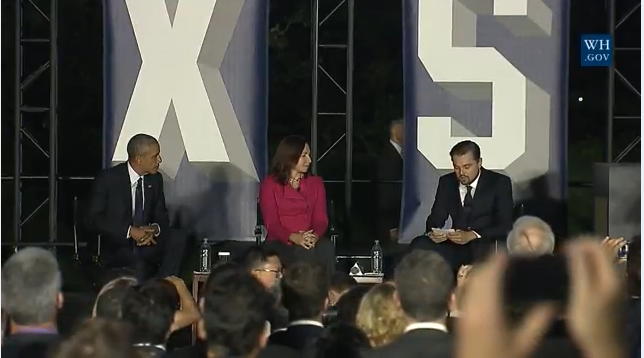 “If we tap the brakes now, then we don’t go over the cliff. When you think about climate change there’s a big difference between the oceans rising three feet or ten feet. Three feet, it’s going to be expensive and inconvenient and disruptive. But it’s probably manageable. Three feet means you move the houses back a little bit from the beach. Ten feet means the beach doesn’t exist.”

"SXSL: A White House festival of ideas, art, and action."

Interview: Save The Planet From Beyond The Grave With A Green Burial December 20th, 2016

This whole concept of conservation memorialization comes much, much closer to people’s concept of the celebration of life.

Hydropower And Wind Farm Combination Plant The First Of Its Kind October 21st, 2016

The hydro plant will be capable of producing 16 megawatts of power, while the wind farm will produce 13.6 megawatts on its own.