Here are some tremendous facts about how humans are changing the planet.

I read your interview with the New York Times. Just a phenomenal, phenomenal interview. I was especially interested in the fact that you said you had an “open mind” about climate change.

If we want America to win again, this is one issue we’re going to have to take very, very seriously. So important.

To help you understand what’s best for America when it comes to climate, I want to respond to some of your comments in that interview. To make it easy, my top people have advised that we speak on the same level: the big league level.

Trump: I’m looking at it very closely, Tom. I’ll tell you what. I have an open mind to it. We’re going to look very carefully. It’s one issue that’s interesting because there are few things where there’s more division than climate change.

Division in this country is tearing us apart. It’s very, very sad. But I’ll tell you what: a lot of very important important people are all on the same page on this whole climate business.

Number one: scientists think it’s a big deal we should take very seriously. Have you heard of the National Academies of Science? These are official organizations that help countries make science-related decisions. And they’re stacked with the biggest brains in their fields — just brilliant, brilliant people.

Well, the National Academies of Science from eleven different countries, including the United States, got together to issue a statement on climate change. It says, in part, “It is likely that most of the warming in recent decades can be attributed to human activities. This warming has already led to changes in the Earth's climate.”

The American people are also worried about it. I mean, great, hardworking Americans. They think about it every day. According to Gallup, 64% of Americans are worried about climate change. That’s the highest it’s been in eight years.

Even oil companies are worried about it. ExxonMobil, for example, is a tremendously successful company. They trace their roots back to John Rockefeller's Standard Oil. Just a terrific American business.

Anyway, ExxonMobil said in a statement that “many global ecosystems, especially the polar areas, are showing signs of warming.” They also advocate “putting policies in place that start us on a path to reduce emissions.”

Other oil companies, such as Shell, BP, Chevron, and ConocoPhillips, have also released statements acknowledging the reality of man-made climate change.

When scientists, the American people, and oil companies all come together on climate change, you know it’s time to start taking it seriously.

Trump: You know the hottest day ever was in 1890-something, 98. You know, you can make lots of cases for different views. I have a totally open mind.

Mr. Trump, with all due respect, that’s thinking small. A day is a very small amount of time, and only losers think small.

As you say yourself in The Art Of The Deal: “I like thinking big. To me it's very simple: if you're going to be thinking anyway, you might as well think big.”

That’s a good thing, because in order to understand global temperature trends, you need to think BIG.

When you look at the facts, there's a clear trend: it's been getting very hot for decades. Something bad is happening. We're going to have to be much smarter.

According to the annual mean global temperature, it’s been getting very hot since the '70s. The hottest year on record is 2015. The second hottest is 2014. 2016 will almost certainly beat both of them. 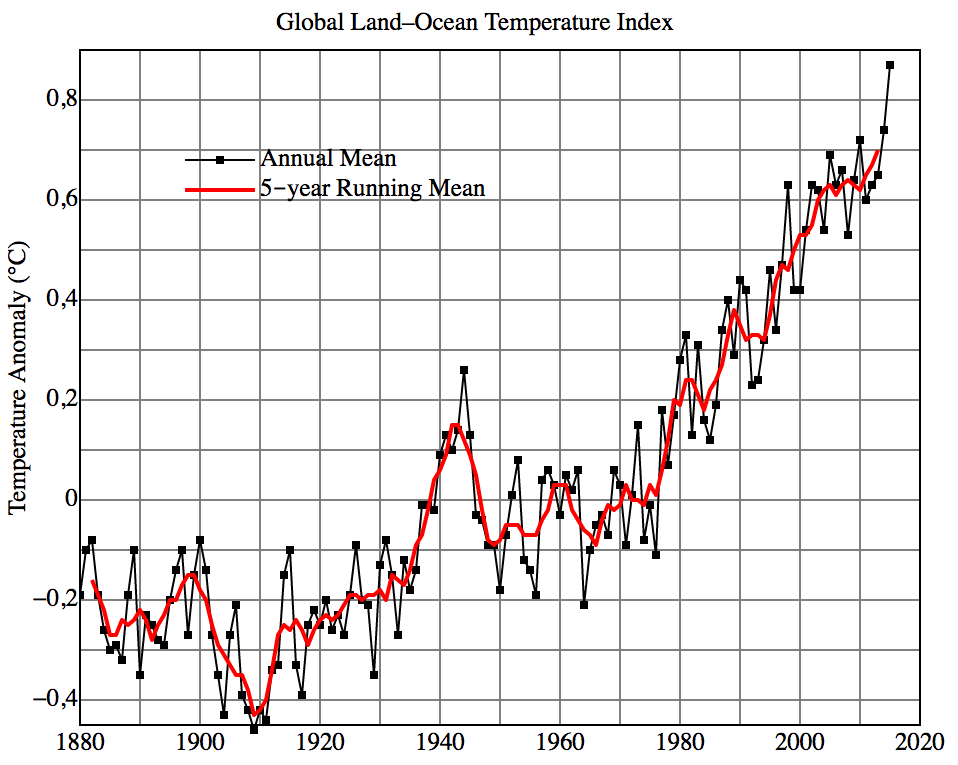 Trump: It’s a very complex subject. I’m not sure anybody is ever going to really know.

As you say in Think Like A Champion, “If I started in business thinking I knew everything, I’d have sunk before I got started. Don’t make that mistake. There are a lot of hidden aspects in every industry, and you will find out how complex seemingly simple things can be.”

But did you not move forward on real estate deals because you thought that nobody “is ever going to really?” No. Morons would do that. Instead, you took action. And we shouldn’t let the complexity of climate change stop us from taking action, either.

In Trump University Real Estate 101: Building Wealth With Real Estate Investments, you say, “In matters of real estate, as in matters of life, nothing substitutes for the ability to make great decisions — decisions that move you as quickly as possible where you need to go.”

So what’s it going to be? Are you going to be timid, throw up your hands at how complex it is, and give up? Or are you going to make our country a leader in fighting climate change? We want to be great again, after all. The very best.

It’s good you realize that clean water is absolutely a huge, huge deal. Because if climate change continues without stopping, it will be a total disaster for our clean water.

Hotter air and water, more powerful rainstorms and runoff, and intense droughts can damage water quality and availability. The west is already suffering tremendous droughts, and the amount of rain has decreased over the past 50 years. Just look these photos of Lake Powell in Colorado. The first was taken in 1999. The second was taken in 2014. 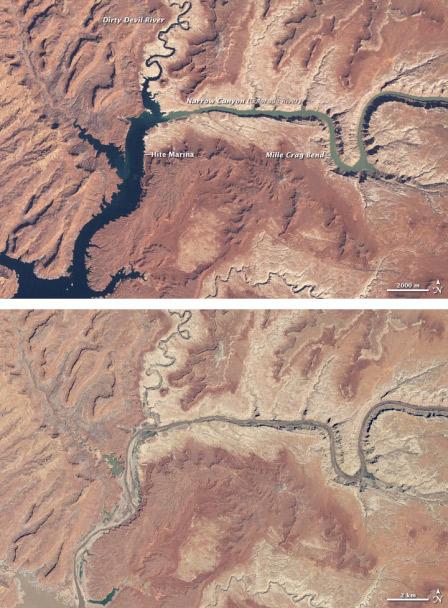 But that's just the dry areas. Wet areas are going to get even wetter. Runoff and flooding is increasing from heavy rainfall in recent years thanks to climate change. Just look at this change in extreme precipitation events. 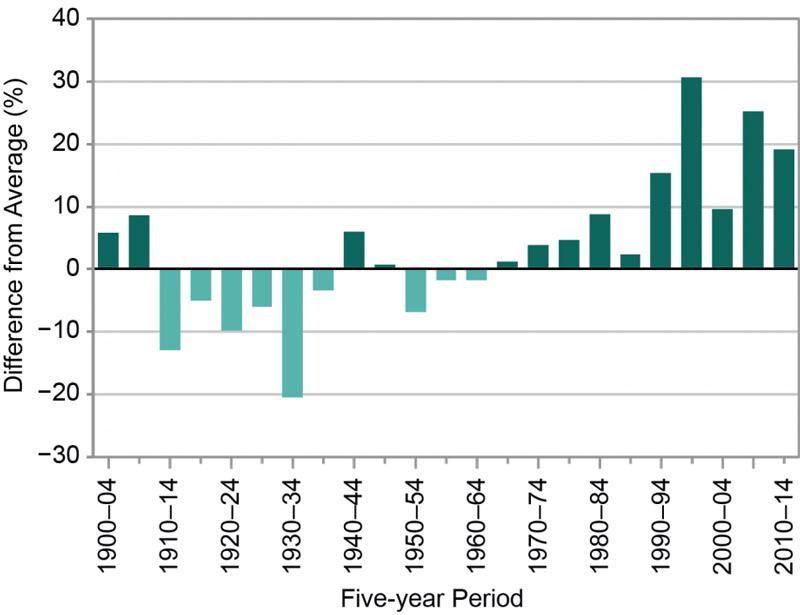 If this trend continues, then lakes and drinking water will be at greater risk of runoff contamination. You don’t want to drink a big glass of water with toxic chemicals or harmful bacteria in it — believe me.

If you really believe that “crystal clean water is vitally important,” you won’t be a lightweight. You’ll step up as a leader on climate change.

Trump: I think right now … well, I think there is some connectivity. There is some, something. It depends on how much.

Mr. Trump, I’ve got some phenomenal news for you.

Climate scientists have crunched the numbers on “how much” connectivity there is between carbon dioxide emissions and warming. I mean, some really magnificent scientists who have been working on this for decades. Some are known and some are not known, but they’re known within their field as being the best.

The connection between something that influences the climate and warming is called “climate sensitivity.” And they have all settled on some very strong numbers. Based on observations, climate sensitivity is likely between 1.5 to 4.5 degrees Celsius per doubling of carbon dioxide.

To put that in patriotic units, that’s roughly between 2.7 to 8.1 degrees Fahrenheit. Most observations tell us that it’s in the middle of the range. So the most likely climate sensitivity is around 3 degrees Celsius per carbon dioxide doubling, or 5.4 degrees Fahrenheit.

Trump: It also depends on how much it’s going to cost our companies. You have to understand, our companies are noncompetitive right now.

Mr. Trump, you are totally right. Our companies are struggling right now. Sad. But you know what will make them struggle even more?

How much will it all cost? The economic estimates of climate change impacts are incomplete. But we do have a ballpark on how expensive it will be. For example, the British Government commissioned a study on its expense. The result was the Stern Review on the Economics of Climate Change (2006). Here’s part of what the 700-page report found:

"If we don’t act, the overall costs and risks of climate change will be equivalent to losing at least 5% of global GDP each year, now and forever. If a wider range of risks and impacts is taken into account, the estimates of damage could rise to 20% of GDP or more."

What a total catastrophe!

Economists have some genuine gripes with the Stern Review, so take it with a grain of salt. But the point is that it’s going to be very, very bad. American businesses can’t afford to have 5% of their bottom line cut, let alone 20%. Anyone who really cares about making America rich will make sure climate change doesn’t steal our wealth.

Ridiculous! You’re right. According to the Economic Policy Institute, a liberal think tank, the United States has lost around 70,000 factories since 2000. And one of the biggest ways we’ve sunk compared to the rest of the world is in the productuction of solar energy cells.

Just take a look at this chart. 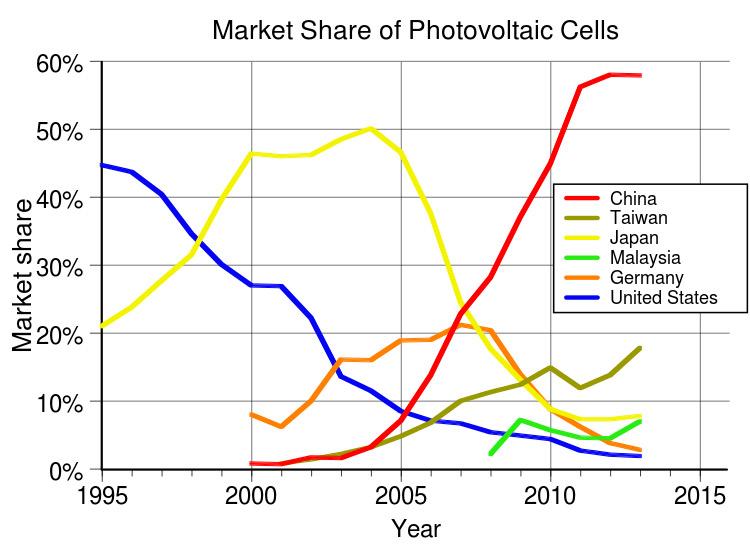 We used to be number one, now we’re getting beaten around by China.

In 2015, China became the number one producer of solar energy. That’s unacceptable. If America’s going to be a winner, we have to show them who’s really the king of renewable energy.

As you say in your book Think Like A Champion, “Don’t ever think you’ve done it all already or that you’ve done your best. That’s just a shortcut to undermining your own potential.”

If you’re going to make America great again, why not take it a step further? Make the whole Earth great again.

After all, a truly great America is one that wins on a planet with a healthy climate. If you let your “open mind” address the problems and solutions we face, you can be the climate change leader that America needs you to be: a tremendous one.

"What happens when scientists, the American people, and oil companies come together on climate change?"