Save the whales with one of these whale watching experiences.

There’s a lot to love about whales. Despite their status as one of the largest mammals on Earth, they are known for their gentle, docile temperament and haunting, complex whale songs.

Unfortunately, seeing a whale in person isn’t exactly simple. Their native habitats are in the Pacific Ocean near California and the Atlantic Ocean near New England. For most of us, getting to that location means a decent amount of travel just to go whale watching — and there’s no guarantee that you’ll even see one on the excursion.

The environmentally conscious traveler is left with this question: is seeing these beautiful creatures in person worth the toll on the environment to get there? If the answer is no, here are a few ways you can see whales in person closer to home without running into an ethical quagmire.

The Georgia Aquarium is conveniently located in Atlanta, which is one of the largest travel hubs in the US. It’s easy to get to Atlanta from just about anywhere in the country, making it an ideal destination for the eco-conscious traveler.

You’ll find several whale species at the Georgia Aquarium, including the beluga whale and the North Atlantic right whale. The aquarium also features the opportunity to swim with whale sharks through the Journey with Gentle Giants program. A portion of all proceeds from those dives go toward the aquarium’s conservation efforts.

And, for the ultimate environment-saving experience, watch Beluga Whales from the comfort of home or wherever you are through the aquarium’s webcam.

Rather than going out to see the whales, they come to you at this spot perched on the edge of their habitat. The Monterey Bay Aquarium is part of the Monterey Bay National Marine Sanctuary and is located on the California coast.

All you need to do to see a humpback whale or blue whale is step out onto the aquarium’s deck overlooking the bay. There’s no need to get on a boat or even venture beyond aquarium grounds. For an added eco boost, money spent at the aquarium goes toward efforts to decrease pollution in the Pacific and protect the animals who call its waters home.

Similar to the Georgia Aquarium, there’s a webcam to provide a real-time glimpse into life on the bay. This a great way to do some virtual whale watching, or just chill out and take a mental break in the middle of a busy day.

Chicago’s Shedd Aquarium offers whale watching to millions of landlocked Midwesterners in an easily accessible venue. The aquarium provides a special opportunity get up close and personal with beluga whales in an exhibit called the Beluga Encounter.

For $250, you can touch a beluga from an underwater ledge. A trainer will be there with you the whole time, and you’ll go home with a framed photo to remember your experience.

Related: Why Whales Are Crucial To The Environment

Located in the heart of downtown Chicago, Shedd is easily accessible from public transportation, and you’ll be within walking distance of many of the city’s other attractions.

Several species of whales are native to New England, but you don’t need to go off the beaten path to find them. Boston’s New England Aquarium offers whale watching cruises that travel from the aquarium to Stellwagen Bank Marine Sanctuary. Sightings include humpback whales and the endangered North Atlantic right whale.

Excursions are held from March through October each year. The aquarium keeps a log of whale activity and guarantees that participants will see whales on every trip. Much like the Monterey Bay Aquarium, the money spent on whale watching excursions goes toward helping preserve the native habitat of Atlantic whales. 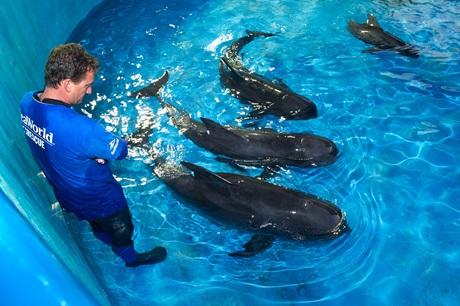 When you think about SeaWorld, you might recall the controversy of the movie Blackfish, which alleged that unsafe practices for the park’s whales lead to the death of trainer David Brancheau in 2010.

Since the film came out, the park has responded by revisiting its training practices, phasing out theatrical performances, and ending its breeding program of captive killer whales. The park has also stepped up its conservation efforts to ensure that whales and other marine life at the park will be around for future generations to see.

In a press release, president and CEO of SeaWorld Joel Manby stated, “As one of the largest rescue organizations in the world, we will increase our focus on rescue operations— so that the thousands of stranded marine mammals like dolphins and sea lions that cannot be released back to the wild will have a place to go.”

While SeaWorld is not a destination for whales in and of itself, it’s an option if you are looking for a kid-friendly experience that offers theme park rides and animal experiences in Orlando, San Diego, and San Antonio.

"A portion of all proceeds from those dives go toward the aquarium’s conservation efforts."

Yes, it’s possible to give a great gift and save the planet.

These 7 US Cities Will Be Most Vulnerable To Climate Change October 24th, 2016

Burning one gallon of gasoline translates to adding 400 gallons of water volume to the ocean in the long run.