Why use harsh chemicals when you can just work with goats?

What do you picture when you think about managing weeds? Maybe it’s a huge bottle of Roundup weed killer, or maybe it’s a gas-powered machine that burns fossil fuel and sends emissions into the air.

What you probably don’t think about is a herd of goats.

However, goats are being used across the country as a sustainable alternative to combat weeds on a large and small scale. They’re environmentally friendly, and they’re cute to boot.

One company, Rent A Goat, has worked on projects throughout California, deploying hardworking goats in the city of San Francisco and at Heartland Fire and Rescue in La Mesa, California.

How Rent A Goat Works 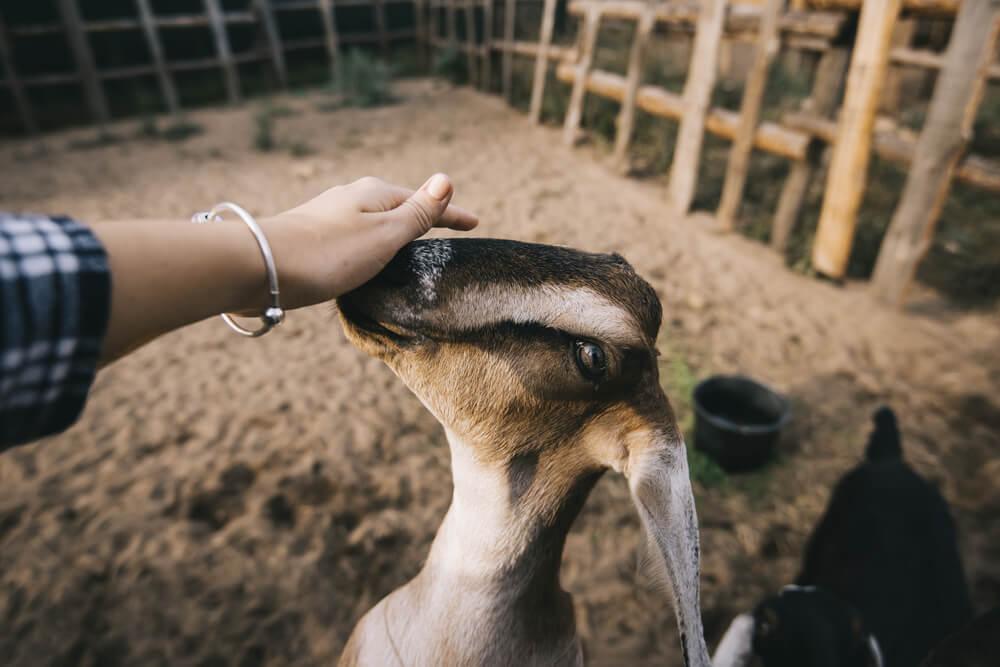 Mike Canaday, Rent A Goat’s Director of Operations, said the company currently has about 2,500 full-grown goats, along with 1,500 baby goats. Most of the animals are Boer goats, a species that originated in South Africa.

Goats are sent in herds of 200 to 1,000 to a client site, along with a herding dog and professional staff member to keep everyone in line throughout the workday.

From there, the goats do what they do best: they feast on all of the plants that humans consider weeds, but they consider breakfast, lunch, and dinner.

“They get rid of a lot of weeds, and they leave the area better than they found it,” Canaday said. “When you go next year to go that same site, it’s in better shape than it was the year before.”

Each goat eats about eight pounds of foliage per day. They especially love poison ivy, honeysuckle, and other weeds. They “work” from 9 a.m. to 5 p.m. each day, and then are taken back home to rest for the evening.

Prior to a goat setting foot on a site, the area is secured with an electric fence to prevent the goats from wandering astray. The amount of setup and staffing time means that Rent A Goat is currently only able to serve sites of at least five acres in California.

Canaday said one of the biggest misconceptions about the business is that goats are available on demand for uses other than weed management.

“People think that they can rent a goat for an hour, but that’s not possible,” he said. “They can’t use them to propose to their girlfriend or celebrate a winning football game.”

Goats are often used to clear paths, preventing forest fires, Canaday said. California is especially prone to wildfires, and the goats are able to create fire breaks without adding chemicals to the air or ground. Goats are also able to tackle terrain that might be difficult for machines to reach.

“Keeping these invasive plant species under control is one of the tools in the firefighters’ toolbox to be able to fight those fires,” Canaday said.

Other uses include weed maintenance for businesses and governmental organizations. Goats allow them to stay on top of landscaping and maintenance, and the facilities gain some natural fertilizer as an added benefit.

Costs are comparable to other types of landscaping services, and the public benefits from seeing the cute and cuddly goats enjoying a meal. It’s often the first chance people have to interact with a goat outside of a petting zoo.

“People love goats. They absolutely do,” Canaday said. “We had about 1,000 goats in downtown San Francisco, and people just love bringing their kids down to see them.”

The city of Lemon Grove, California used 150 goats to clear weeds from a vacant lot owned by the city with great results.

"They love what they do, and they do a good job of it. What they do is eat — a lot!" former Lemon Grove Mayor Mary Sessom told CBS News. "They don't get sick, they don't call in and say, 'I don't feel good today,' they don't care about how hot it is, how cold it is. They're out there doing their job.”

Looking To The Future

Canaday spent 30 years raising and training border collies before transitioning to goats in 2003. At 70 years old, he has no plans of stopping anytime soon.

“What else would I be doing? I can’t even imagine,” he said. “I love what I do, and I’ve gotten to meet a lot of great people.”

He hopes to expand the business so that things like home service and smaller-scale operations will become more feasible. In the meantime, Rent A Goat offers a referral program to help those interested in goat grazing connect with goat farmers in their area.

“I just think that going into the future, we need to go in a sustainable way. Resources are limited even though it appears that they’re not,” Canaday said. “This just a good way of doing things. You just can’t beat working with goats.”

"People love goats. They absolutely do."

Horizon Solar really is only interested in one thing: YOU want to go Solar.