Learn more about the strange creatures that inhabit the deepest parts of the ocean.

In 200,000 years of human history, we’ve explored nearly every corner of this planet from Antarctica to the Sahara Desert. Still the deep sea remains mostly a mystery.

A bizarre world where the light is more terrifying than the dark, the deep sea is home to some of the most unusual creatures you’ve ever seen.

Some deep sea fish reach terrifyingly huge proportions, and others have teeth that will give you nightmares.

But not every feature unique to deep sea fish inspires terror. A scientific phenomenon known as bioluminescence makes fish glow, and many deep sea fish can go for long periods of time without eating.

Let’s take a deep dive and learn more about 10 of the strangest deep sea fish. 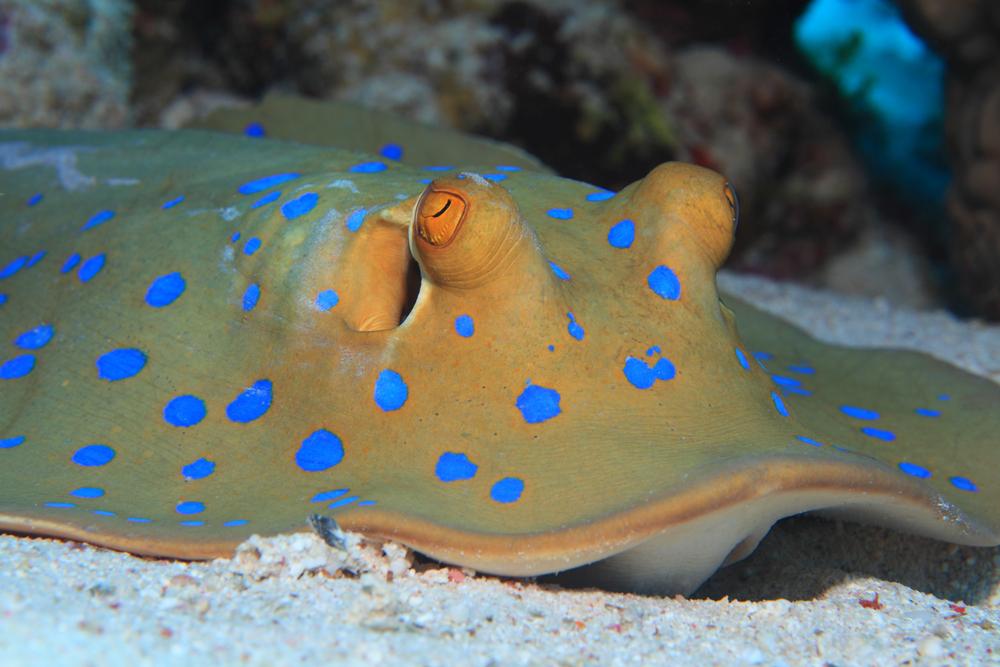 Let’s start our adventure with a deep sea fish that isn’t nightmare fuel: the humble stingray.

Many different species of stingray live in the ocean, and you can find them anywhere from the surface to the sea floor. Deepwater stingrays inhabit the murky depths, and are the largest and most widespread of the species.

A close relative of the shark, stingrays don’t have a single bone in their body — their skeletons are made out of cartilage. These creatures can grow as long as 14 feet and weigh as much as 770 pounds.

Mostly harmless to people, the stingray delivers a painful sting if threatened.

Even though the batfish lives at the bottom of the ocean, this deep sea fish is actually a terrible swimmer. This creepy creature prefers to walk on fins that function much like feet.

The lipstick-wearing red lipped batfish shown in the video lives in the shallower parts of the ocean, but like the stingray, there are many varieties of batfish who inhabit all depths.

Batfish who live in the deeper depths have a bioluminescent lure that extends from their heads to attract and trap prey.

This disturbing mashup of a spider and a crab measures up to 14 feet from claw-to-claw, and can weigh up to 40 pounds, making it the largest species of crab.

Japanese spider crabs live up to 100 years — longer than any other crab — and can weigh up to 60 pounds.

Despite their terrifying appearance, these deep sea creatures are surprisingly fragile. As many as three-quarters of all adults have lost at least one leg. Overfishing also threatens these vulnerable species, and there are many preservation efforts underway.

One surprising thing separates opah from other deep sea fish. It’s not their crimson and coral coloring, nor is it the fact that these creatures can grow up to 6.5 feet long.

Unlike its cold-blooded deep sea neighbors, the opah is fully warm-blooded. It wasn’t until 2015 when scientists learned it can keep its entire body temperature consistently 5 degrees celsius warmer than its surroundings.

The bioluminescent viperfish is one of the fiercest predators of the dark, deep ocean bottom.

Viperfish have jaws that can open up to 90 degrees, revealing a mouth full of unusually large and terrifying teeth.

When it’s time to hunt, this deep sea fish flashes the natural lights on its body to attract prey, before chomping down on whatever it’s able to lure.

While the viperfish are thought to live 30-40 years in the wild, they rarely live more than a few hours in captivity.

As much as a giant isopod looks like a monster from a horror movie, it’s very much a real creature. With an average length between 7.5 and 14 inches, it’s the largest isopod in the world.

Despite its bug-like appearance, the giant isopod is actually a crustacean and is closely related to the pillbug. And just like its land-dwelling cousin, these deep sea creatures curl up when threatened, and are known to bite.

Along with many other deep sea fish, it can go for long periods of time without food. But when they do eat, watch out. The giant isopod can gorge itself to the point of becoming immobile.

The most disturbing thing about the anglerfish isn’t its mouth filled with razor-sharp teeth, nor the fishing pole-like bioluminescent beacon it uses to lure prey.

No, the most disturbing thing about this deep sea fish is its mating habits. When it’s time to find a partner, the male anglerfish doesn’t mess around. After it finds a mate, the male digs his teeth into the female’s stomach. The two fish fuse together and the male becomes a parasite.

Not only does the anglerfish mate for life, but it’s also a believer in polyandry — a female can often keep more than six males fused to her body.

The black swallower may be a small fish, but don’t let that fool you into thinking it’s harmless.

Known for its large stomach, this deep sea fish can swallow prey up to four times its size — and it doesn’t stop to take a bite. Its super stretchy stomach allows it to gulp down prey that’s not only significantly larger than it, but also up to 10 times its mass.

This list about deep sea creatures just wouldn’t be complete without mentioning the blobfish.

Voted the world’s ugliest animal, it has a gelatinous body that gets pressed into a blob by the heavy water pressure at the bottom of the ocean.

If anything on this list will give you nightmares, it’s the frilled shark.

The prehistoric looking deep sea fish is rarely encountered alive, and wasn’t seen in its natural habitat until 2004.

This living fossil has 300 hooked, brutally sharp teeth arranged into 25 orderly rows, and can grow up to 6.4 feet long.

Did we miss your favorite deep sea fish? Tell us in the comments!

"A bizarre world where the light is more terrifying than the dark, the deep sea is home to some of the most unusual creatures you’ve ever seen. "

63% of Americans say they worry “a great deal” about drinking water pollution.

How Rainwater Harvesting Could Transform Your Garden (And Water Bill) April 3rd, 2017

Rainwater harvesting systems are the perfect environmentally friendly way to water your garden.